Browse the article How Audi's Travolution Device Will Work 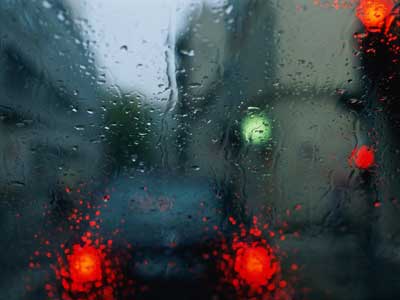 Are red lights the bane of your existence? Drivers are learning how to go with the flow, and technology is making it possible.
Sami Sarkis/Photographer's Choice RF/Getty Images

You might not be down with the lingo, but if you regularly drive through urban areas, you've probably ridden the "green wave" at one point or another.

The drive starts out like any other, just a quick trip across town to pick up some dry cleaning. You drift effortlessly through the first green light and coast through the next intersection as well. To your growing amazement, you easily make the third traffic light, too. Will this streak of traffic luck hold out? Will you arrive at your destination without stopping for a single light?

For many, the green wave may seem something of a divine gift from the otherwise unsympathetic traffic gods. For hypermilers, however, there's nothing supernatural about hitting all the lights just right. Like a gambler who works the mathematical odds instead of relying on lucky charms, these savvy individuals drive to beat the system. Hypermiling simply involves driving your vehicle in a manner that maximizes fuel efficiency and minimizes exhaust emissions -- and a key way to achieve both is to cut out unnecessary stops and rapid accelerations.

­Frugal hypermilers live for increasing their vehicle's gas mileage, but even the most experienced green wave rider has his or her limits. You may have a great feel for the road, but you can't talk to the traffic lights. Or can you? In the German city of Ingolstadt, something peculiar is afoot. Certain luxury vehicles have been observed gliding effortlessly through intersections. Even when they're forced to stop, they never seem to have to wait long. Who are these mysterious drivers, and what allows their cars to cut though the municipal traffic system?

It's no coincidence that the vehicles are all Audis, and that the automotive manufacturer is headquartered in Ingolstadt. The Bavarian city is currently playing host to an experiment in the future of driving called Travolution. With Audi's Travolution system, intelligent traffic lights talk to each other and cars talk to traffic lights, all to the benefit of human drivers. 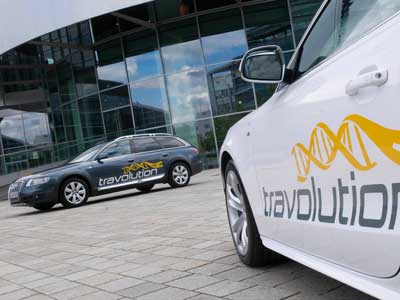 These two Audi vehicles were designed to interact with intelligent traffic lights on the streets of Ingolstadt, Germany.
Photo courtesy Audi of America

The evolution of traffic lights is a journey from mindless automation to increasingly intelligent, fluid traffic management. The simplest traffic lights operate on timers, giving each flow of traffic a predetermined period of red, yellow and green. These models are frequently used in cities, where traffic flows are predictable if not consistent. As such, they may be set up to handle rush-hour surges, but might be powerless against atypical traffic on a Sunday afternoon. Other traffic lights require a vehicle to trip a detector in order for the signal to change. In both examples, the traffic light system responds only to programming or minor traffic detection.

As more and more vehicles take to the streets, cities face greater traffic congestion -- to the point where simply building larger roads is no longer a valid fix. Instead of adding more lanes, traffic engineers and scientists have worked to create intelligent transportation systems. These systems involve various regulating measures that can be divided into intelligent infrastructure and intelligent vehicles. Instead of simply managing vehicles at a specific intersection or on a particular road, the system would regulate a city's collective traffic flow in all its stops and surges. Under ideal circumstances, traffic infrastructure would not only manage the vehicles on the road, but stay in constant communication with the cars' onboard computers.

­Intelligent transportation systems involve numerous technologies, some already widespread, others merely developing. On the infrastructure side, intelligent traffic lights play a major role in keeping vehicles flowing along, and feature prominently in Audi's Travolution system. The city of Ingolstadt boasted 46 intelligent traffic lights during the summer of 2008, with plans for 50 more throughout the city. These lights are networked together, which reduces stopping time for vehicles. Again, the idea is not to simply create clockwork barriers for traffic to filter through, but to manage the flow of traffic for maximum efficiency.

The Travolution system also features an intelligent vehicle component, and this is where the system really appeals to hypermilers. The traffic lights don't merely communicate with each other; they communicate with the vehicles themselves -- in this case, specially augmented Audis. During the summer of 2008, the company had two vehicles on the road, but plans to add an additional 20 vehicles.

How does Travolution change the driving experience on the streets of Ingolstadt? Get behind the wheel on the next page.

The Travolution Device and the Future of Driving 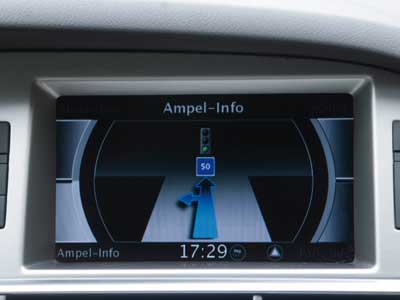 This Audi multimedia interface screen displays Travolution information for drivers. If they maintain a speed of 31 mph (50 kph), then they'll coast through a green light -- even if the light is currently red.
Photo courtesy Audi of America

Green means go, red means stop -- this much is simple. But what exactly does a yellow traffic light mean to the average driver? Most driving instructors will tell you it means to come to a complete stop if you can safely, otherwise, proceed into the intersection cautiously. In reality, however, you might find yourself wondering if you can blow through without getting a ticket or smashing into another vehicle. And if the driver behind you is dead set on getting through, then stopping could get you rear-ended.

Traffic engineers call this scenario the dilemma zone, but Audi's Travolution device aims to take most of the suspense out of approaching an intersection. A Travolution-equipped vehicle receives signals from intelligent traffic lights in the area, informing it exactly when the light will change. The vehicle's onboard computer then calculates exactly what speed the driver needs to maintain to continue through the light without stopping the vehicle. The computer then relates this information to the driver, via the Audi multimedia interface (MMI) infotainment system. The driver might need to maintain a slightly higher or lower speed to make the light, but he or she won't have to come to a complete stop. This doesn't just cut down on driver irritation, it cuts down on fuel consumption and exhaust associated with accelerating back up from zero.

With Travolution, communication between the car and traffic light is a two-way street. The system allows vehicles to actually change an upcoming light to green if there's no opposing traffic. While this might sound like cheating to some drivers, it's just another aspect of traffic lights as traffic managers, not traffic limiters. After all, if the light's red for no reason, why shouldn't it change for you?

Of course, Travolution compatibility drops down to zero once you leave the test streets of Ingolstadt. This fact drives home one of the problems raised by the system: Most intersections don't have intelligent traffic lights, and it will require a great deal of time and money to install them. On top of this, there's vehicle compatibility to consider. Plus, even if you fully update every street with the latest technology and sync it up to a network, you still have to worry about human error and good-old fashioned driver stupidity. Just because Travolution tells you to go a certain speed, doesn't mean you have to. And what about other vehicles? Obeying Travolution might not be the best idea if the vehicle in front of you just came to an abrupt stop to avoid running over a squirrel.

Many futurists think that driving technology such as Travolution will eventually lead to the existence of automated highways, where the opportunity for human error is negated entirely. Most scenarios predict a relationship very similar to that between Travolution vehicles and intelligent traffic lights: Vehicles will communicate with the larger intelligent traffic system, effectively becoming a part of it. In the meantime, however, modern drivers will need to stay sharp, even if the vehicles and traffic lights are getting smarter.

Explore the links on the next page to learn more about driving technology.