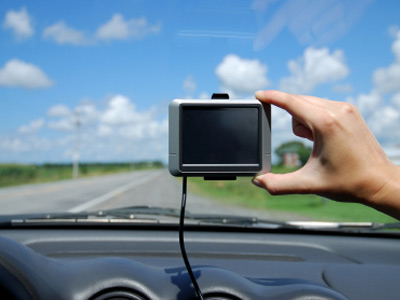 A decade ago, global positioning system (GPS) devices were marvelous, almost science-fictional gadgets that you only found expensive cars or perhaps handheld GPS devices owned by very wealthy people. The funny thing about GPS devices is that despite the mystery that often surrounds their operation they're actually fairly simple devices. Global positioning is made possible by a network of 24 satellites that orbit the Earth, beaming radio signals down to the Earth's surface. The GPS device picks up these signals in a similar manner to the way your car radio picks up a local radio station -- or more accurately, the way a satellite radio receiver picks up a satellite radio station -- and uses the signals from three or more satellites to triangulate its own position. Recently, the digital electronics revolution has made it possible to manufacture these gizmos relatively cheaply, so that even those of us who aren't fabulously wealthy can now afford them.

The major difference between one GPS device and another is often in the features that it offers prospective buyers, and some of the features on the latest generation of GPS navigators are pretty amazing: voice recognition, real-time traffic data (usually from a subscription service that you pay for monthly), red light and speed trap warnings, trip logs that record your progress, upgradeable maps, and useful (or just fun) extras like Bluetooth integration, MP3 players and picture viewers.

On the next few pages we'll look at five of the best GPS devices currently on the market and review some of the features that make these gadgets so irresistible, even if you aren't going on a long trip.