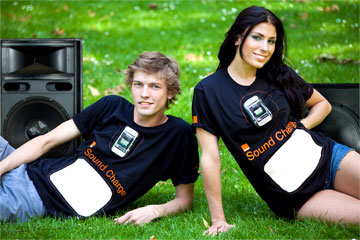 Those snazzy shirts are one of telecom firm Orange's efforts to build eco-friendly phone chargers. The white rectangles on the shirts are the piezoelectric films.
Image courtesy Orange

The short answer is of course a T-shirt can turn sound into electricity. In fact, such a shirt makes a great DIY project. To begin, you'll need a sewing kit, some Velcro, a yard or two of Berber carpet and a few ounces of catnip. After that, it's simply a matter of adding the cats and standing ready with a bolt of wool cloth, some amber rods and a few dry cell batteries.

If feline fashion raises your hackles, you could opt instead for the Sound Charge T-shirt. Ginned up by European telecom firm Orange, its fashion sense might fall well short of a living cat shirt's je ne sais quoi, but it is easier to pack -- which is good, since running the airport security gauntlet in a shirt wired up with a built-in sound-to-current converter, battery and cell phone power dock strikes us as unwise.

T-shirts are a favored platform these days for novelty microelectronics. The pages of ThinkGeek teem with examples of techno-tees that light up with LEDs, sport sound-effect-spitting speakers or let you draw, play guitar or display WiFi connectivity [source: ThinkGeek].

Speaking of speakers, Orange's fancy fabric employs the same piezoelectric film found in audio electronics, but it works in the opposite direction: Whereas speakers pump electricity into piezoelectric materials to produce sound vibrations, the Sound Charge T-shirt converts incoming sound pressure into voltage. Internal wiring then pipes the juice to a reservoir battery that is aimed at fueling several different phone models [sources: Orange; Srivastava].

The tympanic tee is only the latest zesty idea plucked from Orange's concentrated efforts to build a more eco-friendly -- and headline-grabbing – crop of phone chargers. For four years, the company has partnered fruitfully with renewable energy enterprises such as Gotwind to trot out a new green gadget annually at the Glastonbury Festival of Contemporary Performing Arts in Somerset, England [sources: Boyle; Orange; Telegraph].

Orange estimated that 80 decibels of sound would rock its shirts at Glastonbury, a level of noise akin to the din of a busy street. That much guitar squeal and drone amounts to about six watt-hours of juice -- enough to charge two cell phones or one smartphone -- but, like making fresh-squeezed orange juice, it will take some patience. Accumulating a full charge will take between 12 hours and a full weekend of ear-bleeding.

We suggest texting rather than talking, at least until your hearing recovers [sources: Orange; Telegraph]. On the other hand, you could try your luck with any of the growing collection of novelty chargers on the market, particularly since, as of June 2012, none of Orange's gizmos are for sale.

Mixing Apples and Oranges ... and Vodafones

When it comes to cell phone chargers, Orange is far from the only company setting its sights on greener pastures.

The rise of portable consumer electronics has contributed to an increase in green power demand, not only because we want phones that last longer between charges, but also because overcharging can waste as much as 60 percent of the energy drawn from outlets [source: Crow]. Moreover, in 2009, we generated an estimated 51,000 tons (46,266 metric tons) of redundant chargers, a landfill load that has inspired the push by some toward developing universal wireless chargers [sources: Brown; Howard].

Consequently, if you're willing to shop around -- and to wait for greener gadgets to reach the marketplace -- you'll likely not lack for options.

For the Penguin and Poppins crowd, there's the cell phone-charging umbrella built by Britain-based telecom firm Vodafone. From 12 solar cells adorning its capacious canopy, current trickles to rechargeable batteries or directly to a mobile device docked to its USB port. An onboard micro antenna boosts 3G reception. The Booster Brolly relies on solar cells, though, so it probably makes a better parasol than bumbershoot [sources: Srivastava; Trenholm].

Slip into something more chargeable with Power Felt, the carbon-nanotube-packed fabric developed by Wake Forest University researchers that turns heat into electric current. Imagine powering your mobile devices while working out, or while sitting in your car, butt-dialing and generating seat heat [sources: Knibbs; Nosowitz].

Taking a similarly toasty tack, a concept phone by designer Patrick Hyland absorbs body heat through a thermally conducive copper back panel and converts it to charge using an internal thermogenerator [sources: Ascharya; Brown]. Perhaps the power company will let feverish patients bank extra watt-hours against future drawdown, but it's probably more likely that hospitals will tap our febrile bodies to power our own life-support equipment.

Applications for such materials beyond cell phones abound, including powering flashlights, radios and other emergency devices, or possibly capturing the waste heat generated by laptops.

Planning a trip? Try designer Jung Inyoung's luggage of choice -- a rolling hard-shell suitcase that stores kinetic energy via wheel gears as you pull, then converts it to charge [sources: Cha; Fitzgerald]. With the right shoe inserts and socks, your feet will generate even more electricity [sources: Knibbs; Srivastava]. Better still, if you happen to be ambulant through certain parts of France, you could help power the city of Toulouse -- provided they've installed their energy-absorbing sidewalk panels by then [source: Boyle].

After all, when it comes to greener energy, talk's cheap. We all need to walk the walk.

Thermogenerators work via a stack of thermocouples, aka a thermopile, which generates a voltage as a result of temperature differences between two junctions made of different metals. This phenomenon is known as the thermoelectric effect or Seebeck effect -- named for its discoverer, German-Estonian physicist Thomas Johann Seebeck [sources: Boyle; Encyclopaedia Britannica].

Building a greener cell phone charger is a noble goal; ridding ourselves of the destructive and polluting habit of buying a new phone every six months or so is an even better one. Since that's unlikely to happen, dumping the need for chargers might be the next best thing.

To this end, companies are not only looking at greener charging methods; they are also exploring removing the need for chargers altogether. One promising possibility, which builds upon technology first explored by Nikola Tesla, involves adapting portable electronics to work with inductive chargers -- devices that cause electric current to flow in a conductor without touching it.

Theoretically, any electronic device could be so charged, and we could have inductive chargers everywhere that we currently have their wired cousins -- in cars, on a kitchen counter, in the office, you name it.

If successful, marketing flacks would no doubt rename the devices -- Apple can't put an "i" in front of "inductor," after all -- but that's just window dressing. The real problem lies in convincing cell phone companies to step away from the ever-profitable peripherals trough.

Were companies serious about reducing landfill fodder and making our rare-earth elements last as long as possible, cell phones would be upgradable, not disposable, and we wouldn't have multiple versions of the same phone requiring different cases, protectors and interfaces just because someone moved a port or button a millimeter or two to the left.

As matters currently stand, should we ever manage to get greener chargers to the mass market, they're bound to be compatible with only a single carrier and phone brand, or possibly -- cyber-heaven help us -- one model series: "Oh, you have the iGreen charger? Sorry, that's only compatible with the iPhone 4. The 5 series requires iChartreuse."

It's enough to make you green in the gills.