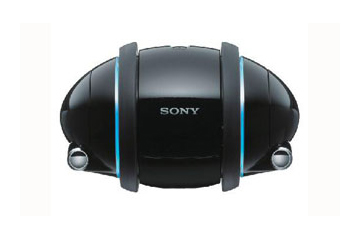 Credit Sony with its willingness to make an unusual, egg-shaped music robot. The Rolly didn’t quite make it commercially, but its innovative design will be hard to forget.
Courtesy Sony

You might have been perfectly content watching Rolly improvise its dance moves to "Billie Jean." Or perhaps you wished it would add just a little more flair with its arms as Michael Jackson hit the high notes. With the included Choreographer software, you could program dance moves galore for your little Rolly.

The program analyzed your music for both tone and beat. In "automatic" mode, Rolly determined the most appropriate motion for each song's characteristics. Quick beats generally resulted in more excited motions, while slower, softer tunes meant a more subdued Rolly.

The software (which is used for Sony VAIO products and the GIGA JUKE) worked thanks to Sony's 12 Tone Analysis technology, which analyzes songs for genre, mood, chord progression, structure and other characteristics.

Tone Analysis starts its job by checking a track for tone. In a musical scale, each octave has 12 detectable tones, which the software pinpoints. After registering tonal data and the timing of certain sounds, the program can pick up on other important characteristics like chords, tempo, beat, key and more.

After Tone Analysis completes its work, it assigns metadata descriptors to each track. That metadata basically offers a quick summary of the song, such as genre or mood, which can be used to quickly arrange songs in playlists or perform searches.

For example, if you really love Chicane and you wanted Rolly to play similarly fast, epic songs, the device might queue up Tiesto or Moby. Likewise, if you were in a somber mood, the application might spin up The Cure or Nine Inch Nails.

But music was only half of Rolly's fun, as you'll discover on the next page.