How have record players modernized?

How Modern Vinyl Production Has and Hasn't Changed 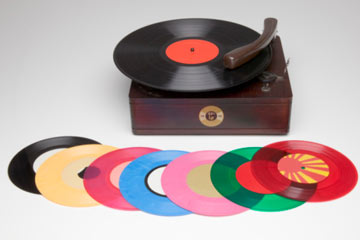 Even though records now come in an array of candy colors, the production process for pressing records hasn't changed much through the years.
©Creatas/Thinkstock

How recently do you think the last vinyl press was manufactured? If you guessed the 2000s or the 1990s, you were way off. New vinyl record pressing machines haven't been created since the early 1980s [source: Soh]. That's right -- vinyl albums are still being produced on 30-year-old machinery.

Despite vinyl's resurgence of popularity in the first decade of the 2000s, it hasn't boomed in a way that merits the manufacture of new pressing equipment. And, obviously, the pressing process hasn't changed much, either, since the machines doing the pressing have been around longer than CDs and MP3 players. Still, there have been some advances in the way vinyl albums are produced. For example, United Record Pressing in Nashville, Tenn., created a split-colorpress using existing press elements in 2010. While it was possible to create multi-color vinyl before, chunks of colored vinyl had to be manually cut and reassembled, then put through a manual press. The split-color press automated that process, making it faster and cheaper.

Modern vinyl albums may be pressed from the same hardware as they always have been, but the audio that gets pressed into those records isn't produced the same way. Albums produced in the 21st century often come from digital masters, meaning music was digitally recorded in a studio and then pressed onto a vinyl master disc that's used to press records. In decades past, music was recorded using analog mastering, and some music fans believe an analog master will sound better than a digital one. That is, after all, one of the reasons vinyl fans prefer the sound of a record to a digital recording -- they like the warmer analog sound missing in the bits and bytes of a digital file.

Some artists still have vinyl albums pressed from analog masters, but ultimately the quality of the mastering equipment and the skill of the audio engineer outweighs the differences between digital and analog. Vinyl produced today can sound just as good, or even better, than albums produced in the 1960s or '70s.