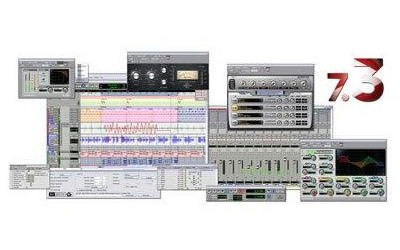 The Pro Tools suite of software simulates many of the functions of a traditional recording studio.
Courtesy Amazon

Even a powerful DAW is useless without the right software. There are several music studio software packages on the market. Some provide audio engineers with a full suite of functions ranging from mixing and recording to adding effects like echo and reverb. They also range in price -- some are several hundred dollars and others are available free of charge. Most of these software packages provide the same basic set of functions. These include equalizing, editing and mixing. Let's look at each of these in turn.

In audio production, equalizing refers to tweaking the frequency levels on an audio signal. A good software package should allow engineers to do this to individual input channels as well as the overall mix. The software includes an interface known as an equalizer. Equalizers divide frequencies into segments called bands and usually range from 20 hertz (Hz) to 20 kilohertz (kHz), the range of human hearing. By tweaking the intensity levels for the frequency range of an audio signal, an engineer can emphasize or deemphasize certain pitches.

Methods for editing and mixing tracks vary from one software package to another. In general, most packages let you manipulate sections of a track or mix together multiple recordings to create the best final edit. Many packages allow you to cut, copy and paste sections of a track into a new format. Think your chorus should come in a bit earlier? No problem. Use the software's interface to shift it up a few measures.

Editing and mixing can also give engineers other options, such as adjusting the volume of particular channels or sections of the track, fading sound in or out or shifting sound so that it pans from one set of speakers to another.

One important task audio engineering software handles is working with MIDI data. MIDI stands for Musical Instrument Digital Interface, and is the standard by which computers, electronic musical instruments and other digital devices share musical information. MIDI isn't a music file -- it's a series of digital instructions that tell digital devices how to create a specific sound. Most audio engineering software can edit and mix MIDI data with other recorded audio formats.