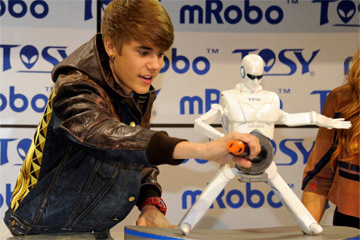 Bieber doesn't look too worried about the moves the mRobo Ultra Bass was throwing down at CES in January 2012.
Ethan Miller/Getty Images

It starts like a contortionist -- arms at its sides, head down, legs tucked behind its torso. But once its chest speaker starts pumping out those block-rocking beats, this plastic party animal folds his funk into an upright and rocked position. He's mRobo Ultra Bass, and he's here to get this party started.

Yes, we've come full circle: from humans dancing like robots, to robots dancing like humans ... dancing like robots. This toy's moves might be stiffer than a giraffe on ice skates, but manufacturer TOSY hopes you'll focus on what it says sets its toy apart: the ability to match its moves to the music. Such claims leave us to wonder whether Justin Bieber intended to introduce mRobo at the 2012 International Consumer Electronics Show (commonly known as CES) in Las Vegas, or pass the baton, one plastic, manufactured celebrity to another.

Once you've uploaded your tunes via the handy USB port, select your jam using the included remote. According to the manufacturer, mRobo can perform its preprogrammed dance moves to its own music, music from other devices or music streamed via Bluetooth.

But does this pantomime of popping and locking qualify as dancing?

If you run mRobo's Vietnamese taglines through Google's translator, the phrase "great dancing" translates as "jump beautiful." Whether that's accurate or not, it's kind of poetic. Still, it makes us wonder: Is dance strictly a human phenomenon?

Happy Feet aside, research suggests that a few animals -- parrots and elephants -- can move to the beat of music [source: CBS News]. But does rocking to a rhythm capture the artistic totality contained in the concept of dance? As famed American dancer and choreographer Martha Graham once said, "We look at the dance to impart the sensation of living in an affirmation of life, to energize the spectator into keener awareness of the vigor, the mystery, the humor, the variety and the wonder of life."

Perhaps that's a question for later generations. All I know is, mRobo does better on the dance floor than most guys at my high school; at least he lifts his arms above his waist.

Do You Love Me (Now That I Can Dance)?

Toy companies and marketing reps have been selling us for years on so-called dancing flowers and their ilk, but they don't really rave so much as rock repeatedly to sound. Granted, many of us don't do much better, but, hey, we're human; the dance bar for us is, paradoxically, set lower.

The real selling point of mRobo lies in its proprietary software, which its Vietnam-based manufacturer claims enables the bot to analyze tracks for beats and rhythms and then match its moves to the music [source: Trang].

This, admittedly, is pretty cool.

The mRobo Ultra Bass is not TOSY's only dancing robot. DiscoRobo, his glowier and cuter cousin, can also, according to the company Web site, "catch the beat" and "feel the heat." The diminutive, toy-marketed bot makes up for his lack of speakers or storage with "lively facial expressions" that the manufacturer says also match the music.

The mRobo and DiscoRobo join a slew of mechanical creatures programmed to "dance" to music. My Keepon, a cutesy baby-chick-like robot spun off from a social-development aid and autism-study tool, both bops to the beats and reacts to touch. The 10.8-inch, 1.9-pound (27.4-centimeter, 0.9-kilogram) toy lists at $40, but sells for as low as $14.98. A portion of the proceeds go toward supporting development of My Keepon's research-related relative [source: BeatBots].

Fijit Friends, another interactive toy that can shake its mechanical groove thing, stands 8.6 inches (21.8 centimeters), weighs 1.6 pounds (0.7 kilograms), and can make digital faces and respond to around 30 phrases [source: Mattel]. It retails for around $14.99.

France's Aldebaran Robotics uses dance numbers to demo its NAO robot's remarkable balance and 25 degrees of freedom, but those dance moves are preprogrammed. Honda's Asimo shows off its balance in similar fashion.

So, who has it where it counts? Well, in a Popular Science-hosted dance-off, Fijit and Keepon got served by DiscoRobo's wider repertoire of electric boogaloo, and mRobo sports more degrees of freedom, more moves and more advanced programming than DiscoRobo [source: Iozzio].

Yes, it will be your private dancer, your dancer for money, but will it rank as 2012's hot holiday gift, or will retailers drop it like it's hot?

TOSY first made a name for itself when its Ping-Pong-playing TOPIO robot debuted at the 2007 International Robot Exhibition (IREX 2007). Two years later, the 6-foot-tall, 264-pound (183-centimeter, 120-kilogram) player was voted Best Robot at IREX 2009 and was christened "A Ping-Pong-playing Terminator" by Popular Science [source: Borel].

The Vietnamese manufacturer also develops industrial robots and a remote-operated version of TOPIO that can tend bar and wait on customers. While building its robot empire, the company continues to release toys, including an award-winning Frisbee-boomerang, a motorized spinning top game and a robot that draws preprogrammed images on paper [source: Good Housekeeping].

When our robot masters finally rise up to destroy their naive creators, we will be prepared, I hope, to meet our decapitations with equanimity. That said, having our heads subsequently spiked as part of some robotic touchdown dance strikes me as excessive.

Which raises the question: Do we need a dancing robot-speaker? Silly consumer, of course we do! I mean, you might as well ask if we needed a Big Mouth Billy Bass, a Let's Rock Elmo or a Furby ... ah, yes; point taken.

Look, isn't life's dance floor strewn with tiny humiliations enough already? Do we really need to add another? Are we supposed to lose our jobs AND our dance partners to these transistorized TraVOLTas? If you ask me, the whole thing will end in tears -- likely following the inevitable humans-vs.-robots, John Henry-esque dance-off (tragically, all humans perish, consumed in a disco inferno).

After that, there'll be no saving us -- unless, that is, Dr. Funkenstein and his agents of Supergroovalisticprosifunkstication return in their P-Funk Mothership to provide funk deliverance.

I can picture it now: Bootsy Collins beaming down to some Australian discotheque to rescue Sarah Connor. As he extends his ring-bedecked hand, he utters those nine fateful words:

"Funk with me if you want to live, baby."

Here’s Something Else Your Smart Watch Can Do: Detect Irregular Heartbeat
Hold on to Your Socks. They’ll Help You Watch Netflix
Body Blow! Body Blow! Counting Punches With Wearables for Boxers