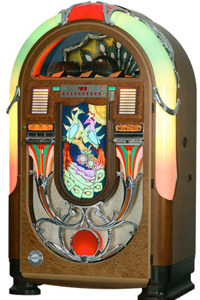 The Wurlitzer Peacock is another classic. Restored versions of this popular machine sell for thousands of dollars
Courtesy Gibson

During the Depression, jukebox makers struggled onward, and their persistence paid off. In 1933, there were maybe 25,000 machines in the United States. By 1940, there were well over 300,000 [Source: Segrave].

It was then that the big names in jukeboxes showed their domination: AMI, Wurlitzer, Rock-Ola and Seeberg. With edgy marketing campaigns and hordes of salespeople, all of them pushed to stay ahead of each other in a music technology arms race.

Then a real-life arms race, in the form of World War II, roiled the industry. Jukebox manufacturing stopped as the federal government rationed materials like metal, which could be used for military purposes. Rather than idle their workers and machines, companies like Wurlitzer retooled their factories to produce war goods instead of music machines.

Once the war ended, though, military men returned home in droves, and post-war partying began in earnest. The jukebox was there, and its fortunate timing helped turn these music machines into an icon of a generation that grew up in the 1950's.

Jukeboxes are so ingrained into post-World War II culture that period films and TV shows set in the 1950's frequently use jukeboxes as props. These machines weren't passive furniture. They were gaudy, loud centerpieces of social interaction.

Early jukeboxes were designed in the likeness of the first radios, often featuring wooden cabinets. But jukebox manufacturers wanted their products to scream out their technological edginess and modernity. Wurlitzer, in particular, became known for pushing the boundaries of machine designs. They often featured mesmerizing bubble tubes, polarized and pulsating lights and artful cabinets. The most beautiful are now collector's items worth many thousands of dollars.

One of the most popular jukeboxes of all time is the Wurlitzer 1015, which blended wood cabinetry with space-age lights and chrome flourishes, as well as a see-through dome that let customers watch the changer move between albums.

Aesthetics were one thing – but the social impact of jukeboxes was perhaps even more profound. After the turn of the century, music, like the rest of society, was segregated by race lines. Radio stations often refused to music recorded by black artists.

But jukeboxes helped to level the playing field, as individual business owners could stock their machines with any music that they thought might draw more customers. In doing so, jukeboxes introduced untold numbers of people to a minority group's tastes. In short, jukeboxes provided financial incentive for black artists to share more and more of their artistry, all of which made pop music more diverse.