How to Convert LPs to Digital Files 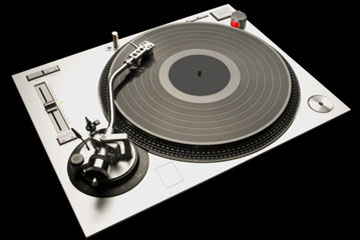 You can use your turntables to play your records, but why not use it to convert them to digital?
Tony Cordoza/Getty Images

If you're working with a conventional turntable, you'll need some way to connect that turntable with your computer. Most standard turntable components have dual RCA output jacks, one for the right speaker and one for the left. You'll need a Y-shaped audio patch cable that you can buy at any audio store for as little as $10. This connector plugs into the stereo's two output jacks (be sure to connect the red plug to the red port, and the white plug to the white port) and then connects to the computer's line-in jack. On most computers, you shouldn't plug into the microphone jack because the sound quality will be poor.

Digitizing old LPs is trickier than copying cassette tapes because of the way records are made. The line-in jacks on computers are made for cassette and CD players. But records must go through an equalizer or the sound quality will be terrible. If your turntable is a system into which you plug speakers, your amplifier should be good enough. Otherwise, you will need to use an external sound card that accepts the RCA input or a dedicated preamplifier (also called a receiver).

The preamp is important because the line-in jacks on computers don't use the Recording Industry Association of America's (RIAA) curve. The RIAA developed a playback equalization curve that equalizes the bass and treble frequencies. Records and stereos use the RIAA curve, and if the equipment you use when copying LPs does not, you will have terribly tinny sound with lots of pops and squeaks. Think about antique phonograph records and you get the idea. The preamp between the turntable and the computer solves the equalization problem [source: Vinyl].

Once you have your stereo connected to your computer, you'll need good Digital Audio Workstation (DAW) software. Read on for tips on software and output formats.