Could a wristband replace air conditioning?

Browse the article Could a wristband replace air conditioning? 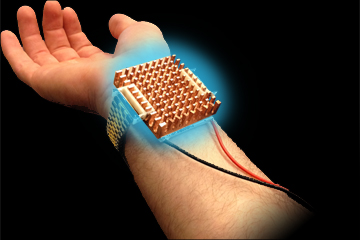 Wristify is a thermoelectric bracelet that keeps your body cool or warm.See more pictures of gadgets.
Wristify

If you've ever used one of those individual seat warmers that come included in a number of cars these days, you probably understand that temperature, and human beings' level of comfort with temperature, is relative. What Volkswagen makers have deemed a "2" on a rising heat scale of 1 to 5 others might simply call "pants on fire." The same level that your friend riding shotgun finds cozy and comfortable might make you grab his ice-cold Mountain Dew and douse yourself below the belt.

The personalized nature of separate seat warmers makes it easy to please everyone, but individual temperature preferences can cause problems in communal settings like hotel rooms, homes and offices. The good news is that a team of techies is working on a new device that allows people to enjoy the individualized comfort of a seat warmer even after they leave the car. This technology is all in the wrist.

Wristify is a prototype device that aims to deliver thermal comfort to users by changing their perception of temperature. Developed by students at the Massachusetts Institute of Technology (MIT), the wearable gadget delivers cooling or heating waveforms, tailored to personal preferences, to a small part of the user's wrist in tiny, quick bursts. The technology is based on the idea that cooling or heating one part of the body can change the wearer's perception of a comfortable temperature. Think about taking a cold shower after a workout or hopping into a heated Jacuzzi on a brisk night, but only exposing a small section of skin and not getting wet [sources: Vanhemert, Burlingame].

Will this new technology mean the death of home heating and cooling and the end of office jockey squabbles over cubicle temperatures? Probably not, but it could make you more comfortable at home and work. It could also cut down on energy bills. 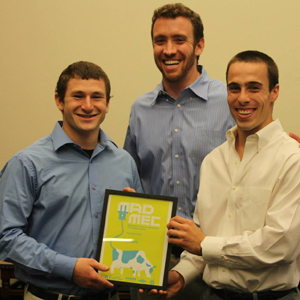 Wristify operates on the concept that exposing just one small area of skin to a quick temperature change can affect the wearer's thermal comfort by changing the person's perception of temperature. Place a cold washcloth on your forehead and you immediately feel cooler, but eventually your body adapts to the temperature change so that it no longer perceives the washcloth as cold. Wristify is designed to make the wearer continue to feel cool by sending a steady stream of increasingly colder pulses to the skin [sources: Vanhemert, Burlingame].

The product's developers say it takes a temperature change of more than 0.1 degrees Celsius (0.18 degrees Fahrenheit) per second in order to make a person feel several degrees warmer or colder. A current Wristify prototype changes at 0.4 degrees per second and works for up to eight hours a day on a lithium battery. That was good enough to earn it a $10,000 first place prize at an MIT materials-science design competition in October 2013 [sources: Matheson, Burlingame].

The prototype looks like a man's watch. It includes a square face component called a thermoelectric heat sink that's composed of copper alloys and lowers the device's temperature by dissipating heat. The gadget, worn with a wristband, also includes thermometers that measure body and air temperatures and an automated operation system to control the intensity and duration of pulses. Because the technology is intended to change the wearer's perception of temperature, Wristify doesn't allow the wearer to adjust the temperature manually. The prototype currently comes attached to a number of unsightly wires, but developers say they are working to make the device better-looking and easier to wear [sources: Burlingame, Matheson, Wristify].

Can't wait to wrap one of these around your wrist? The product isn't commercially available just yet, but experts and energy conservationists are already getting excited about its potential impact.

The early press on Wristify and its underlying technology is aflutter with cute vignettes about how families and co-workers will never again have to quarrel over where to set the thermostat. But where Wristify really has an opportunity to break new ground is on lowering the high costs associated with heating and cooling office buildings, apartments and houses.

Heating and cooling accounts for nearly half of the annual home energy consumption in the U.S. and comprise almost 17 percent of energy costs nationwide each year [sources: Vincent, Energy Information Administration]. By keeping wearers comfortable in varying environments, Wristify developers are hoping to make users less likely to crank up the A/C or heat and take a chnk out of those costs in the process. The technology is incredibly energy efficient in that it's designed to heat people, not spaces [sources: Vincent, Vanhemert].

Just when these energy savings may become available is still unclear. Wristify remains in a prototype stage as of 2013, and its creators say they're exploring additional funding to help them eventually bring the product to market, possibly by 2015 [source: Wristify]. If and when that happens, strapping on a thermo-bracelet is likely to be affordable; the developers say they can currently create the device with about 50 bucks' worth of off-the-shelf components. Some commentators have even hypothesized that the technology might soon find its way into smart watches that combine cell phone and other technologies into a wearable timepiece [source: Burlingame].

Wristify isn't the only interesting new technology to come out of MIT's 2013 materials-science design competition, also known as "MADMEC." Second place went to the designers of GeckoLight, small, sticky LED lights that can attach to any surface and are powered by sunlight and rechargeable batteries. The environmentally friendly lights are intended to replace dirty, kerosene-based lamps still widely used in many developing countries [source: Matheson].

Even if Wristify is indeed the wave of the future and in a few short years we're all wearing personalized wristbands that let us maintain optimal comfort (it will probably be a device that also lets us make phone calls, surf the Web and even monitor outside temperatures), I'm going to go out on a limb and say that there will still be huge swaths of the U.S. that are off limits to me most parts of the year simply because they're too cold. I don't like the cold. More importantly, I don't like the gray, overcast skies that often accompany frigid temperatures. Call me a self-diagnosed sufferer of seasonal affective disorder, but cloudy skies and 5 p.m. nightfalls put a damper on my day. A wristband that can warm me up on a chilly afternoon sounds nice, but what I really want is a device that brings out the sun.