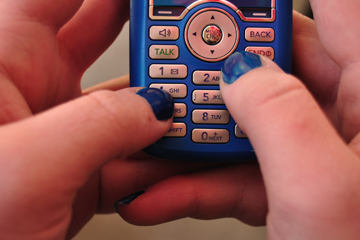 These days, all sorts of people text -- not just teenagers.
Zoonar/Thinkstock

I only got a smartphone last year, so I still feel behind in terms of figuring out all that it can do. There's a dizzying array of apps -- that's applications if you're even more "behind" than I was --- available, and some of them are incredibly useful. You can manage your finances or track your fitness, for example.

But many people in the healthcare industry are looking at an older technology that all cell-phone users have: SMS. SMS stands for short message service, and it's basically another way of saying text messaging. For all of those apps, plenty of us still enjoy using our phones to text back and forth. Some organizations take advantage of SMS by using texts to do things like remind you to vote for a specific candidate or tell you about an upcoming sale. So why use SMS for healthcare when there are apps available? Because although many of us have smartphones, not everybody does. And even if you do, some people don't want to bother having to learn how to use an app. They aren't always free, and the free ones are of varying quality. Also, not all apps are available for every type of cell phone or operating system.

But everybody with a cell phone can text -- and more than 70 percent of cell-phone users do. That makes it a potentially revolutionary tool for healthcare. In 2010, the U.S. Department of Health and Human Services (HHS) formed the Text4Health Task Force with the goal of coming up with new ways to share health information via text message. The hope is that communities that are traditionally underserved by medical professionals, such as rural populations, low-income areas or areas with large minority populations, can be reached in a whole new way. Next up, we'll look at just a few of the ways that SMS can revolutionize healthcare. 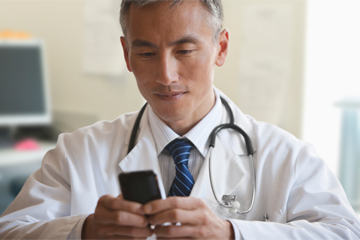 You exchange text messages with your friends, your family and maybe your co-workers, but your doctor?
SelectStock/the Agency Collection/Getty Images

In 2011, the Department of Human Health Services helped support the launch of a program called Text4baby, which sends free health information and links to resources to mothers via SMS during their pregnancies and through their baby's first year of life. Researchers at the University of California San Diego and Cal State San Marcos University evaluated the program in November 2011 and found promising results. Most moms who signed up said that they learned valuable information, appreciated the reminders to make appointments and immunizations, and talked to their doctors about topics sent to them.

Other ways to use SMS include facilitating better communication in the healthcare industry. Many doctors' offices will communicate with you via e-mail, but have you ever texted with your doctor? One of the issues at stake when it comes to healthcare professionals and texting is HIPAA, the Health Insurance Portability and Accountability Act. The act essentially protects the privacy of your health information, which is more of a concern than ever with the conversion to electronic files. TigerTextPRO has a text messaging service that encrypts information and claims to be HIPAA-compliant, so it can be used by health professionals and staff. It's faster than a phone call, and we all know that time can be of the essence when a doctor is on the way to the hospital.

Many doctors are also using text messages to answer patient questions, give information on how to manage a specific condition and remind patients of appointments or when to take medication. But again, it's important that physicians safeguard any private information sent via text just as they would in a phone call, or they could face lawsuits.

It's impossible to cover all the ways that text messages are being used in healthcare, but I'll end with a few really interesting ones. How about cutting down on your wait time in the ER or at least knowing what you're in for? ER Texting is a company that sends you wait times, directions and other information about the nearest hospital emergency rooms (if they participate) when you send a single text with a code. The possibilities don't just apply to those of us living in industrialized countries, either. Even many people living in countries with almost no healthcare infrastructure have basic cell phones or access to them. After the 2010 earthquake in Haiti, for example, the CEO of a non-profit called Medic Mobile coordinated with local and other relief forces so that any victim needing assistance could text a special code for free. The company has since developed a way to classify and categorize messages by urgency and need, and it operates programs in more than 20 countries.

I think some people might scoff initially at the idea of using text messages for anything but just chatting, but when you look at the reasoning behind focusing energies there instead of developing more apps, it makes sense to me. The apps are going to happen anyway -- there are thousands and thousands of them in the Health and Fitness categories in iTunes and Google Play alone -- but SMS is just more accessible right now and to a broader range of people. I'm not texting with my doctor yet, but I like the idea. Maybe it'll keep people from getting unnecessarily worked up by asking "Dr. Google" about a symptom instead of a real doctor.