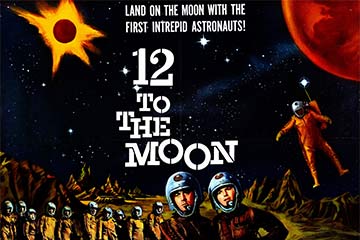 The film '12 to the Moon' depicted a moon landing by an international crew -- which back in 1960 seemed like pure science fiction. Now, it's history.
Universal History Archive/UIG via Getty images

It can be overwhelming to make this realization, but we're now actually living in the future that science fiction books and films have been telling us about for so long. And for the most part, these authors and filmmakers did a pretty decent job of predicting what the future might hold for us -- technologically speaking, anyway.

For every laughably off-base sci-fi prediction (flying cars, memory implants, alien interaction, the list goes on), there's one that's almost eerily on the mark (the dead-on iPad prototype in "The Hitchhiker's Guide to the Galaxy"). Even fairy tales and fantasy stories from centuries ago will get it right every so often. It's a stretch, but you could call the magic mirror in "Beauty and the Beast" an 18th-century predecessor of FaceTime and Skype.

The magic mirror and its ilk are more wishful thinking or lucky guesses than anything else. There's obviously no way that anyone in the 1700s or earlier had even a hint of real technological knowledge about electricity, let alone smartphones. But later on, as science fiction came into its own as a genre and authors developed serious scientific knowledge and interest in technology, the fictional versions of the future started to get more accurate. Many authors and filmmakers collaborated with or fact-checked their theories with scientists, making their work all the more accurate -- and sometimes prescient.

You'd be excused for getting sci-fi déjà vu these days when you confront the mass of new technologies that are constantly appearing around us. The total body scanners that are now a familiar sight in U.S. airports have very strong hints of 1990's "Total Recall." The retinal scanners and real-time targeted advertising in "Minority Report" are becoming more commonplace. The movement-controlled Xbox Kinect also harks back to the Tom Cruise film. And Stanley Kubrick's "2001: A Space Odyssey," although it does have its fair share of clunky misses, is loaded with now-familiar items: talking computers (although ours are not quite as interactive as HAL), e-books, space stations and space shuttles.

There's an intriguing flip side to this subject, too: Scientists and students have been coming across fascinating sci-fi fictional technology and then actually doing the work to make it real. Thad Starner, a lead developer of Google Glass, names "Terminator 2" an early motivation for the project. In 2010, two high school students won the Siemens Competition for an emotion-detecting algorithm inspired by the 2004 film "I, Robot" (based on the classic sci-fi novel by Isaac Asimov). And chemical engineering students at Stanford started trying to develop self-healing skin after watching an "X-Men" movie.

These examples are only the tip of the iceberg. There's probably a group of grad students at MIT watching "E.T." right now and deciding to make flying bikes a reality. And only time will tell which other sci-fi predictions will turn out to be true – and which ones we'll laugh at later.

How the LOBIN Smart Shirt Works
How to Adjust Your TV for the Best Picture
Can clothing neutralize pollution?