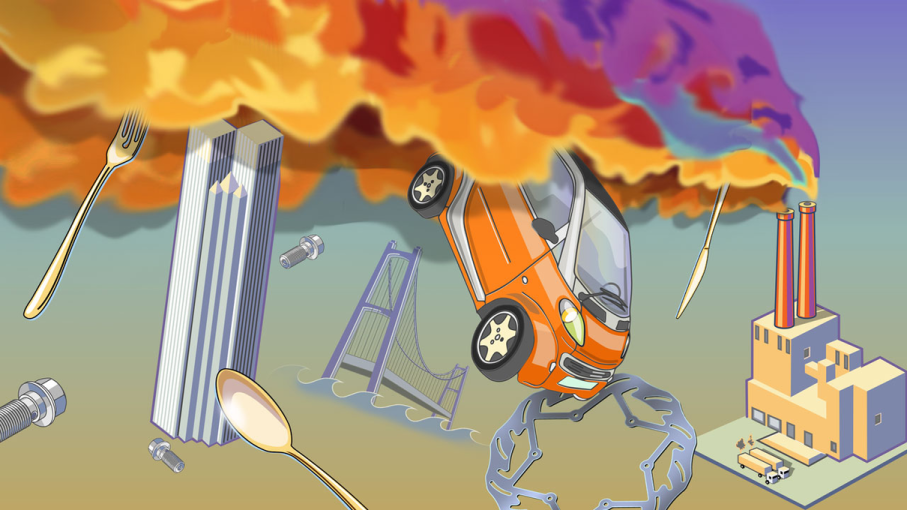 Could carbon dioxide pulled from the air be turned into carbon nanofibers used in construction? The possibilities are promising. HowStuffWorks

But here's what would be totally great. What if we somehow could suck the excess carbon dioxide that we're producing out of the atmosphere, and then actually use it to make tons of carbon nanofiber building materials?

Well, a team of scientists has developed a revolutionary technique for doing just that. In the process, they may not only help prevent sea levels from enveloping our cities, but we could fill those cities with cheaper, bigger, more durable skyscrapers and lightweight, energy-efficient cars that are far more crash-resistant than anything on the road today.

Researchers are generating carbon nanofibers (above) from carbon dioxide, removing a greenhouse gas from the air to make products.
Stuart Licht, Ph.D.

Pulling Something out of Nothing

The new process, developed by George Washington University chemistry professor Stuart Licht and a team of colleagues, uses concentrated solar energy to create a molten bath of chemicals that reaches 1,380 degrees F (749 degrees C). When air is added to the cell, the carbon dioxide dissolves when subjected to the heat and direct current from nickel and steel electrodes. As the gas breaks down, the carbon molecules cling to the electrodes and build up into nanofibers. Then the electrodes can be removed from the bath so that the carbon nanofibers can be put to use. (Here's a GWU press release with more details.)

While the laboratory demonstration of the process created just a tiny amount of carbon nanofiber (one tenth of 1 gram), Licht says in an email that it wouldn't be that tough to scale up the process without driving costs through the roof. "Chemical and materials engineering will expedite scale-up to commercialize this technology," he says. "The technology uses inexpensive components, such as nickel and steel electrodes, and already appears to be practical and affordable."

Licht envisions building an array of giant C02-to-nanofiber plants in remote locations across the globe, calling places like the Australian Outback, and the Sahara and Mojave deserts "ideal."

Licht says the technology also could be used to capture C02 emissions as they stream out of power plant smokestacks, which would stop those greenhouse emissions right at the source. In doing so, it could finally be the "clean coal" solution that government researchers have been chasing for years with little tangible success. And better yet, while most of the other clean coal technologies require capturing carbon and then storing it somewhere at significant cost, Licht's process actually would produce a valuable commodity.

One question, of course, is what we would do with the enormous quantities of carbon nanofiber that those giant plants would produce. According to one analysis, production of nanocarbon-based items has grown at about a 25 percent annual clip in this decade. It's estimated that factories will churn out about 12,300 tons (11,110 metric tons) of the stuff in 2015, with a value of $1.3 billion. That may seem like a lot, but it's still only a tiny fraction of the global steel output of close to 1.7 billion tons (1.5 billion metric tons), according to Worldsteel.org.

But if Licht's process can reduce the cost of carbon nanofiber to $1,000 per ton, as he's predicted, its superior qualities could make it competitive with steel, which now costs about half that.

"The [current] carbon nanofiber market is analogous to the pre-World War II market for plastics," Licht argues. "When carbon nanofiber costs drop, the market is poised to take off with explosive growth by replacing materials and applications in the building, aerospace, car, nanoelectronics, battery, sensor and related industry sectors."

Now That's Interesting
If we wanted to theoretically scrub enough carbon from the atmosphere to return the planet to pre-industrial levels in just 10 years (without even changing our fossil fuel consumption levels), we'd need a C02-to-carbon nanofiber plant that covered 10 percent of the Sahara Desert — about 360,000 square miles (932,000 square kilometers); though it's hard to imagine anyone building a plant 700 times the size of Los Angeles.