Talking to an All-knowing Supercomputer Diagnostician 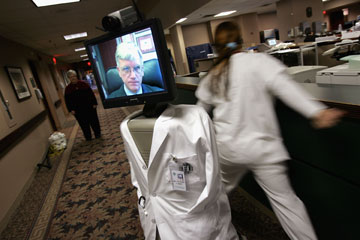 Isabel also has a brother of sorts, an IBM supercomputer called Watson. In 2011, Watson demonstrated its artificial intelligence prowess by handily defeating two flesh-and-blood champions on the TV game show "Jeopardy." But Watson has the potential to do a lot more than win trivia contests. Its developers envision using the system's ability to store and retrieve data to amass what could become the ultimate digital collection of medical data in existence. But that's not all.

Unlike less powerful systems, Watson has the ability to answer questions and analyze information in natural language -- that is, the way that humans express themselves -- and generate all the possible diagnoses that might come from the information. Not only that, but Watson actually can rank the diagnoses according to its understanding of the medical knowledge in textbooks, medical journals and reports of medical cases. In one demonstration of Watson's diagnostic abilities, researchers gave the system a fictitious case involving a patient who lived in Connecticut and had blurred vision and a family history of arthritis. Watson responded with a list of possible causes, topped by Lyme disease -- a seemingly unlikely diagnosis, but the one that researchers were looking for [source: Lucas-Fehm].

In the future, researchers envision adding speech recognition abilities to Watson, so that doctors will be able to communicate with their virtual advisor simply by talking into a smartphone or some other hand-held device. And information that doctors contribute to the system from their cases may be amassed and leveraged to help treat future patients. But there's also the possibility that medical supercomputers may expand their knowledge base beyond just research and doctors' observations. Conceivably, they also could begin data-mining lay sources, such as patients' blogs and comments made on medical Web sites. "What people say about their treatment ... it's not to be ignored, just because it's anecdotal," Dr. Herbert Chase, a Columbia medical school professor told Physicians News. "We certainly listen when our patients talk to us" [source: Lucas-Fehm]. And eventually, so will digital healers.