What Camera Contacts Could Do 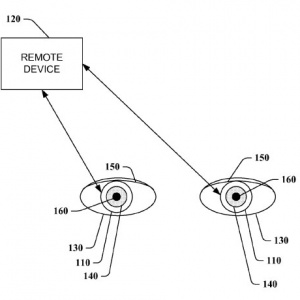 This patent application diagram shows the interaction of the contact lenses with an exterior remote device.
Google/United States Patent and Trademark Office

The obvious function of contacts with embedded cameras is to capture images within the view of the wearer, but contacts with built-in computing components could do much more. If the contacts incorporate a display, the user might be able to see highlighted objects, expanded peripheral views, zoomed visuals or even text and other information superimposed on reality -- in other words, augmented reality.

Images could be processed and interpreted by the internal contact lens components, but the interface and transceiver components could be used to communicate wirelessly with nearby remote devices such as smartphones, tablets, personal computers, Google Glass or other wearable or non-wearable devices. These external devices would have much greater processing ability, and could therefore be used to quickly provide valuable information to the user based on visual data received by the contacts.

The patent lists many other remote device possibilities, including televisions, gaming systems, set top boxes and even car stereos and navigation systems. Many devices these days are connected to the Internet, so with their help, the contacts could even possibly display information from or send images to the 'Net.

The user might be able to blink input command patterns or send commands to the contact lenses via a remote device. It may also be possible to set parameters for automatic image capture, such as certain time intervals or anytime enough power is available, among other criteria. A lot of the functionality will be determined by what software is developed for the contacts, as well as whatever hardware ends up being incorporated.

The patent states that the image data can be processed to detect light, color, color patterns, objects, faces and movement, among anything else that can be determined by analyzing an image or multiple images, and the document even includes some example uses. For instance, images could be analyzed to look for danger, such as a car approaching an upcoming intersection, and the wearer could be warned via an audio or other non-visual cue from a remote device (which could be helpful for a visually impaired pedestrian), or some sort of alert could be displayed on the contacts themselves, such as a flashing LED or a highlighted view of the dangerous object. The contacts could incorporate multiple cameras at various positions and angles that provide a wider view than the human eye can manage, allowing the display to expand the user's peripheral view to provide greater knowledge of the wearer's surroundings. With the right micro-lenses, it could even allow the user to zoom in on things.

The technology could also be used for other things that require a camera and processing power, like facial recognition, another feature that might be useful for the visually impaired, but one that brings potential privacy issues to mind.