How can electronics be stretchable?

Browse the article How can electronics be stretchable? 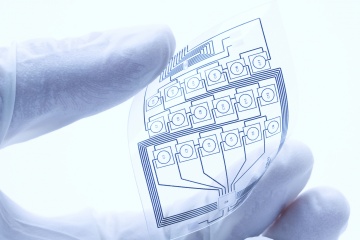 Electronic circuits and components have come a long way since the 25-ton, 680-square-foot ENIAC supercomputer first whirred to life in 1946 [source: Jones]. But despite scientists' amazing achievements in miniaturization, even the tiniest gadgets have been made with rigid materials — until recently [sources: Hockmuth, Yong].

In the past few years, advances in nanotechnology, materials science and manufacturing techniques have led to the development of stretchable circuits and components with the potential to be used in lifesaving medical devices, "smart" athletic clothing, solar energy technology and any number of future applications that we have yet to imagine [sources: Economist, Gaudin, Hockmuth].

Different researchers have found different ways to build stretchable electronics. Engineers at Purdue University took a relatively low-tech approach, using a basic sewing machine and conventional wire to create what they call "ultra-stretchable interconnects" capable of stretching 500 percent of their length and then back again [source: Gaudin].

Using water-soluble thread, the Purdue team stitched wire in a zigzag pattern onto a polyethylene sheet similar to the kind used for overhead projector transparencies. They then poured a rubbery material over the wire and used warm water to dissolve the thread and separate the polyethylene, leaving the wire encased in the rubbery material [source: Gaudin].

At Drexel University, a team of engineers and designers has created a soft, comfortable belly band that stretches around a pregnant woman's abdomen to monitor uterine contractions. Stainless steel or silver thread stitched into the center of the band acts as an antenna, transmitting signals to a base station from a small radio-frequency identification (RFID) tag sewn into the fabric. As the band stretches with each contraction, the frequency of the radio waves changes, allowing the contractions to be measured [source: Kim, M.].

Materials scientists at the University of Illinois Urbana-Champaign have found two ways to create stretchable circuits using silicon, which is typically a rigid material.

The first method requires slicing the silicon to a thickness of just 100 nanometers and applying it to a rubber material that has already been stretched. When the rubber shrinks, the silicon buckles but doesn't break. It can then be stretched in any direction while maintaining its conductive properties.

A second method, called the silicon-island approach, involves connecting tiny squares of silicon with flexible strips of metal wire that can stretch and bend [source: Economist].

The same team of scientists has developed what could be the first stretchable, rechargeable lithium ion battery, which they created by layering flexible sheets of lithium cobalt dioxide cathode and lithium titanium oxide anode between soft silicone rubber [sources: Choi, Fellman].

Researchers at the University of California, San Diego, are working on devices that stretch at the molecular level, modifying the molecular structure of polymers to create semiconducting rubber materials [source: Hockmuth].

And at the University of Michigan, a team embedded nanoparticles of gold into polyurethane, creating a material that remains conductive even when stretched to six times its original length [source: Emspak].