by Cherise Threewitt
Prev NEXT
6 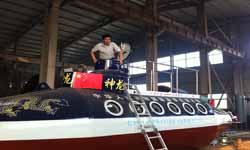 If we ever see a personal-sized submarine fit for human travel, we can thank military researchers and developers around the world. Small submarines were first engineered for research and warfare, and, truth be told, they didn't hold up very well. A 1775 version known as the American Turtle required the operator to steer by hand, while also using hand cranks to propel the watercraft along. It was slow, tiresome work. Despite the cute (and appropriate) name, and a design that seemed destined for steampunk fame, the American Turtle was retired rather quickly.

But using one of the modern versions available would still be fun, though they're generally marketed as playthings for the very rich (the late adventurer Steve Fossett and his pal Richard Branson are known enthusiasts). To be fair, a personal submarine (or even a larger submarine) might not serve much of a practical purpose. Today's submarines, like those of yesteryear, are mainly used for military and research sectors; old models sometimes fall into the hands of drug dealers to be modified for stealth transport. For transportation, realistically, it would be less useful than a boat. It would probably be slower, it would definitely be a lot more expensive and its recreational bonuses have less mainstream appeal. (There'd be killer underwater panoramas, for sure, but no sunbathing, waterskiing or fishing.) People who live in some areas do have commutes over significant spans of water, like bays, rivers and lakes, but there have been no known movements to bring small submarines forth as an alternative to bridges and ferries. As experts point out, though, when military technology gets retired to the civilian sector, we often end up with things we never knew we needed that can do things we never anticipated.