by Kristen Hall-Geisler
Prev NEXT
1 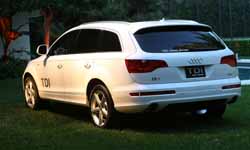 For a long time, diesel has had a terrible reputation. And it deserved it. It was stinky, and filthy, and sent of noxious black clouds from the tailpipes of nasty little cars. Sure, it got more miles to the gallon than gasoline, but is it worth it when you can see and smell the pollution?

Over the years, engineers and chemists have worked to clean up diesel's reputation, and the latest in clean diesels are a vast improvement over the old stuff. But scientists at the University of Texas in Dallas think they've found a way to reduce the pollution and the cost of cleaning up diesel.

Since diesel fuel currently uses platinum -- that's right, the stuff that hip-hop stars' dreams are made of -- to reduce pollution, using just about anything else would make it cheaper. The new material is a business-up-front, party-in-the-back man-made material called mullite. Not only is it cheaper, as you'd expect from an oxide called mullite, but it reduces pollution from diesel fuel by 45-percent.