by Kristen Hall-Geisler
Prev NEXT
10 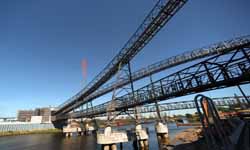 We know coal. It's black and nasty and sooty and makes British moths evolve from white to black in order to hide from predators. It's been around forever and has been powering electric plants for about as long as there have been electric plants to power.

The thing is, coal is cheap, easy to find and we've mastered mining it. It's also the go-to fuel for emerging countries that are maybe less hip to the whole pollution and climate change thing.

The silver lining to this black cloud may be FutureGen 2.0. Is it an app? A Web site built in 2002? A low-budget, late-night, time-slot-filler on SyFy? No. It is a near-zero-emissions power plant being built in Illinois. More than 90-percent of its carbon emissions will be capture and stored (carbon capture and storage, or CCS, is a big thing for energy nerds). The process, known as oxy-combustion, burns the coal with oxygen and carbon dioxide rather than regular old air. This process also does away with mercury, sulfur and nitrogen oxide emissions.