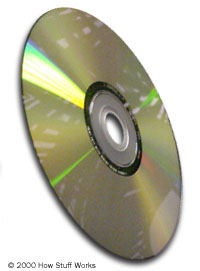 If you rent a lot of DVDs, late fees are an unfortunate fact of life. And if you're not the most organized person around, they might even figure prominently in your monthly budget. Forget to return "Battlefield Earth" for a week, and you'll­ pay more in late fees than the DVD is worth. This, of course, was the video store's plan all along.

If this sounds like you, then take heart -- the march of technology may have come to the rescue. A company called Flexplay Technologies has introduced a new type of DVD that sells at rental prices but never needs to be returned.

A Flexplay® DVD takes care of the "rental period" itself -- it hits a chemical stopwatch when you open the package, and when your time is up (in 48 hours, say), the disc stops working. Recycle it or turn it into a coaster and consider it returned. And because you don't need a standard rental store set-up, just about any store (even restaurants) could potentially sell the DVDs.

It's an interesting idea, and the technology behind it is pretty interesting, too. In this article, we'll find out how these DVDs do what they do.

In most respects, a Flexplay DVD is just like any other DVD -- it has only one major addition.

The basic idea behind standard DVDs is very simple. The images and sound that make up a DVD disc are encoded digitally -- as bits of information (strings of 1s and 0s -- see How Analog and Digital Recording Works for more information).

The DVD manufacturers put all this digital information onto a disc as a pattern of "bumps" (raised areas) and "lands" (flat areas), arranged in a very long track, spiraled around the disc. The manufacturing machinery presses the bumps into layers of polycarbonate plastic and then sputters a reflective metal layer onto the plastic.

Unlike CDs, DVDs actually have two reflective layers -- an inner reflective layer, and a semi-transparent outer reflective layer -- with two different data tracks (so the disc can hold more information). The manufacturing machinery bonds the two layers together using resin adhesive, which hardens into solid plastic, securing the two sides into a single disc.

When you play a DVD, the DVD player shines a narrow laser beam over the data track. The laser hits the bumps and flats on both reflective layers, and the beam bounces back to an opto-electronic sensor (basically, a light reader). Because they are different shapes, the bumps and flats reflect light differently. The sensor detects the difference, reading the pattern encoded onto the disc. (See How DVDs Work for more information.)

Flexplay's discs work exactly the same way, but they include a specialized layer of material in the disc, in front of the inner reflective layer. This layer is the key to the disc's limited play time, as we'll see in the next section.

The secret to Flexplay discs is an extra layer added to a standard DVD structure. This specialized layer includes a chemical compound that readily combines with oxygen in the atmosphere to form a new chemical compound.

While the original chemical compound is transparent, the new chemical compound is opaque. When the layer is transparent, the laser passes straight through to the reflective layers, reading the DVD as it normally would. When the layer is opaque, the laser can't make it to the inner reflective layer, so the disc is effectively blank to the DVD player.

The disc comes in an airtight package, so oxygen can't get to the additional layer. When you open the packaging, the oxygen in the atmosphere starts a chemical reaction. The particular chemicals are balanced so that the reaction proceeds very slowly at first, during the "rental period," and then speeds up. When the reaction speeds up, the specialized layer goes from clear to cloudy. By varying the exact chemical mix in the this added layer, Flexplay can adjust the length of the rental period.

The airtight package slows the reaction down to the point that the DVD will remain fully functional for at least a year.

You can actually see the process at work in the disc. When you first open the airtight package, the disc has a reddish color. When the compound changes, the red color turns to black.

To make these modified DVDs easy to mass produce, Flexplay needed a way to add the specialized layer without overhauling the standard manufacturing process. As we saw in the last section, the two data tracks start out on two separate discs, which the manufacturing machinery bonds together with resin adhesive. To make a Flexplay DVD, the disc manufacturers replace the normal adhesive with Flexplay's proprietary adhesive. This adhesive hardens to form the specialized plastic layer that clouds up over 48 hours.

It's anybody's guess how far this technology will go. The program doesn't have to edge out traditional video stores to be a success -- it simply needs to find a core audience who prefer its unique rental system. Only time will tell.

For more information about Flexplay DVDs and related technologies, check out the links in the next section.

By definition, Flexplay's technology results in unreadable discs, which are essentially useless to the consumer (after that consumer has made a dozen or so coasters anyway). So if the new format takes off, will we be filling up landfills with used discs?

Before launching the discs, Flexplay anticipated this problem, and partnered with a recycling firm to provide an environmentally friendly place for the discs to go when they die. DVDs are mainly plastic, with some metal, so they are actually quite recycling-friendly. See Flexplay: Recycling to learn more about Flexplay's environmental plans.

Potentially, the new format could do more good environmentally than it does harm. Any drive to the video store to return a movie does take an environmental toll, so eliminating this trip definitely adds to the plus column for Flexplay's effect on the environment.