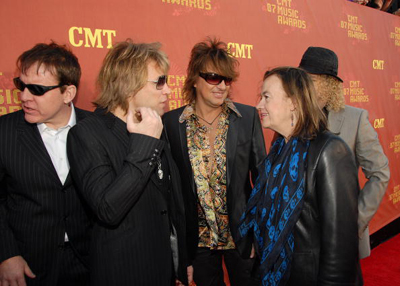 The FCC is requiring all television stations to switch to high-definition by 2008. Some stations like CMT have already made the switch.
© Kevin Mazur/Wire Image/Getty Images

The FCC spectrum auction system was authorized in 1993 by the Omnibus Budget Reconciliation Act. Before this act was passed, the FCC used to hold hearings so that each bidder on a spectrum license could plead its case. The FCC would choose a small group of qualified bidders from the entire pool and then run a lottery to see who would win the license. The entire process could take years and would result in relatively little revenue for the federal government.

The auction system, as the budget act envisioned it, would take less than a year from initial application to licensing. But perhaps the biggest advantage for the government was that auctions would create the incentive for companies to spend lots of money to win a highly competitive license. The recent 2008 auction of the 700MHz spectrum brought in $19.6 billion for the federal government [source: Wired].

The Balanced Budget Act of 1997 made spectrum auctions a requirement in all cases where multiple applications were received for the same initial FCC spectrum license.

Some very interesting policy changes were implemented for the recent FCC auction for the 700MHz spectrum. First of all, the 700MHz spectrum (an umbrella term for the entire frequency range from 698 to 806MHz) is a prime piece of radio wave real estate. These frequencies used to be occupied by analog television channels; remember the dark ages when you could pick up a dozen or so TV stations with some rabbit-ear antennas? Now the FCC has required all TV manufacturers and broadcasters to make the full switch to digital signals by 2009, leaving those old analog airwaves empty and available.

The cool thing about the 700MHz frequencies is that they have relatively long wavelengths, meaning signals can travel longer distances and can easily penetrate mountains, building and walls [source: Business Week]. It's widely believed that whoever gets the licenses for this spectrum will be able to develop powerful mobile broadband technologies. Imagine a huge, wireless, high-speed broadband network that doesn't rely on hundreds or thousands of hotspots or local access points.

When the 700MHz auction was announced, search engine giant Google began lobbying the FCC to require new open standards for license holders. As Google sees it, the current cellular and mobile Internet market is closed off to competition and innovation. For example, if you're a Verizon customer, you can only use certain phones with their service. Or if you buy an Apple iPhone, you must use AT&T as your cellular provider.

Google wanted the FCC to open up wireless telecommunications on four fronts: open applications, open devices, open services and open networks [source: ars technica]. The FCC agreed to impose rules requiring that the license holders of the new 700MHz spectrum would have to open up their networks to all devices and all applications. They would not, however, have to sell any of their network bandwidth to third-party providers.

The new rules are seen as a victory for open standards and increased competition. As it turned out, it was AT&T and Verizon -- not Google -- who walked away as the big winners of the 700MHz auction, buying enough licenses in enough regions to establish nationwide networks. But if they adhere to the FCC provisions, we might see a day in the near future where any Verizon or AT&T subscriber with any device can log onto a blazing fast, nationwide wireless network.

For even more information on FCC auctions, wireless technology and related topics, check out the links below.