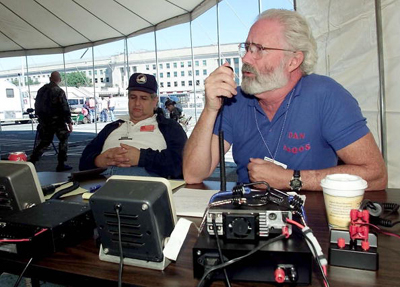 During spectrum auctions, the FCC sells individual licenses to use specific frequencies of available electromagnetic spectrum. Each license gives the license holder the right to use the spectrum freely, as long as they adhere to all FCC broadcaster and operator guidelines and standards. If not, a license can be revoked.

The FCC auction system is only used when two or more organizations want to buy the same piece of spectrum in the same geographical market. For example, if two new radio stations in Denver want the same 99.9 FM frequency, there'll have to be an auction. Since available spectrum is extremely limited, it's almost always the case that more than one organization wants the same spectrum license. Let the bidding war begin!

There are many different kinds of FCC licenses, most of which can be obtained through a simple application process rather than an auction. Amateur radio (Ham) licenses, for example, require only an application and a written exam. Other kinds of professional radio operators and service technicians also need to apply and qualify for lifetime FCC licenses. CB (Citizens Band) radio users don't need a license at all.

But for certain FCC licenses, particularly those in highly competitive markets (i.e. radio and television stations, cellular telephone service providers, et cetera), it's common for the FCC to receive multiple applications for the same spectrum frequencies in the same geographical area. When this happens, the FCC schedules a date for an auction to choose a single licensee from a group of applicants.

As we mentioned, radio frequencies are relatively short-range signals, allowing licenses for the same frequency to be held in different geographical areas. When the FCC plans an auction, it typically breaks the licenses down into regions that correspond to different economic or metropolitan areas. The largest regions are called Economic Area Groupings (EAG). In the most recent FCC auction, there were six EAGs covering all 50 states and territories. Smaller regions are called Major Economic Areas (MEA). At last count, there were 174 of those. Other important FCC license regions are Cellular Market Areas (CMA) and Regional Economic Area Groupings (REAG).

When planning an auction, the FCC sells licenses in blocks. Each block corresponds to two factors: the number of frequencies being licensed and the number of different regions in which they're being offered. In the most recent FCC auction, for example, block B corresponded to frequencies between 704-710 and 734-740MHz in each Cellular Market Area. Since there are over 700 CMAs, the FCC auctioned 734 licenses. As a comparison, the FCC was also selling a block D with only one license for a nationwide public service spectrum.

Now let's look at what it takes to be considered a qualified bidder in an FCC auction.