How are kids using iPads at school?

Browse the article How are kids using iPads at school? 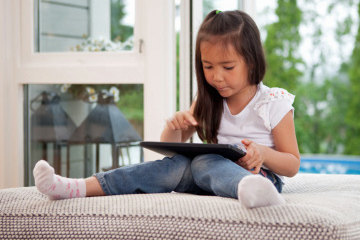 Are tablets the next big thing in education?
iStockphoto/Thinkstock

The use of technology in the classroom is nothing new. Though it may not seem like it now, the ball point pen was quite a technological breakthrough compared to the inkwell. Chalkboards, film projectors, tape recorders, overhead projectors and whiteboards have all contributed to classroom instruction over the years. And each one started out as a new technology that the teacher embraced as an instructional aide. Computer labs were a significant addition to schools, and laptops later brought interactivity to new levels. Students could now ditch their multiple notebooks, and sometimes even textbooks, in favor of the all-in-one laptop. They could use it for taking notes, writing papers, researching information and even test-taking, if the teacher was savvy enough.

Now personal computing has become faster and even more accessible with the invention of products like smartphones and tablet computers. Some might argue that the most innovative and advanced tablet is Apple's popular iPad. Fans of the iPad use it for everything from streaming movies and connecting with others via social media to opening up the world of the Internet on a sleek and convenient platform. The intuitive interface of the iPad has made them easy for children to use, so it should come as no surprise that teachers have now embraced the iPad for use in the classroom.

One classroom technology that hasn't changed very much over the years is the textbook. That is, until now. Apple is working with leading textbook publishers to create electronic editions that are interactive, engaging and loaded with eye-popping graphics. The old days of single use, tear-out worksheets at the back of a worn-out textbook will likely soon be a thing of the past. So the question of whether traditional textbooks should be replaced by devices like the iPad isn't so much a question of "if," but "when."

Paper textbooks have a long list of drawbacks. For one, they're made of paper, so they're not exactly environmentally friendly when you think about the millions of copies of each subject that must be produced. Second, educational information can change quickly, leaving many textbooks out of date and destined for the recycle bin. A book bag full of textbooks is also heavy, and studies have shown that children are increasingly suffering from back troubles and poor posture because of the weight of their backpacks.

Another argument for the use of iPads in the classroom is that children are more drawn to these devices than they are tattered, old textbooks. Like it or not, the information age is well underway and your child is more likely to know how to use a smart phone or tablet than a slide rule and protractor. Kids these days have grown up using these devices, so they're simply more comfortable and more engaged interacting with an iPad than they are a textbook. Just ask any parent who has seen their toddler try to manipulate a flat screen TV by touching the screen.

Creative Uses for iPads in Schools 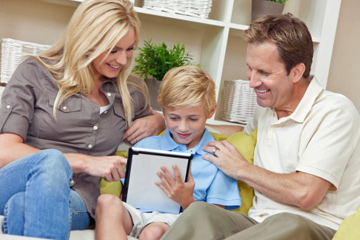 It's easier than ever for parents to be involved in their child's education.
iStockphoto/Thinkstock

Although it's a new technology, there have been a few studies about the use of iPads in the classroom. One teacher in Ohio found that high school sophomores who used iPads scored better on reading and writing sections of standardized tests. Another more widespread study found that math scores in one California school improved by 20 percent over the course of a full school year.

But tablets also prove useful outside of upper-level classrooms; the great thing about the iPad as far as teachers are concerned is that these devices can benefit students from K-through-12.

From a young age, students can use a variety of educational apps like StoryPatch or ComicStrip, which allow kids to create their own picture books or comics. Music apps can help teach budding musicians how to read music in ways that are interactive instead of simply learning notes printed on the pages of sheet music. Art apps let kids draw and paint, as well as helping them to understand more complex relationships of light, shape and color. Open up one of the many photo apps and you may have a future photographer on your hands.

And those are just a few of the more creative apps available. Interactive textbooks let kids take quizzes and tests, thumb through thousands of HD quality photos and films, or even interact with the galaxy around them with astronomy apps. Kids can participate in virtual science experiments, manipulate 3-D images with a simple touch, and connect with a lab or study partner on the other side of the world. The idea of a child learning to speak a foreign language through a live video chat with a student from that country is something that teachers and parents are quickly embracing. Of course, security and Internet is a major factor, so the teachers will have to carefully monitor use. But, the future of the iPad and other tablet devices in the classroom is much like the products themselves -- virtually limitless.