The Transforming Gun Meant to Resemble a Smartphone

Browse the article The Transforming Gun Meant to Resemble a Smartphone 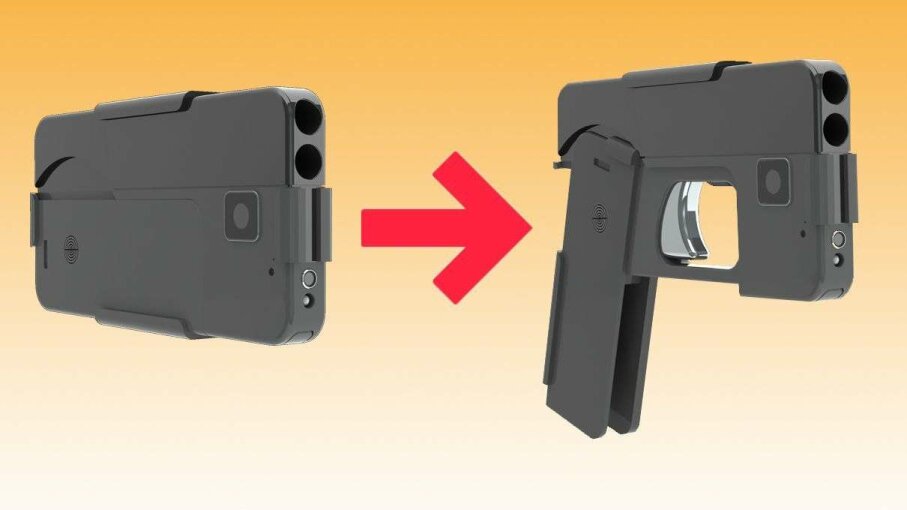 A startup company called Ideal Conceal hopes to create a gun that can be disguised to resemble an unassuming smartphone. Ideal Conceal

Judging from news coverage, it seems as if more and more people across the country want to carry concealed weapons, now that all 50 states have legalized the practice. But as Minnesota entrepreneur and gun enthusiast Kirk Kjellberg notes, a lot of Americans also are uncomfortable with the idea of being around someone who's packing heat. Kjellberg recounted a recent occasion when he went a restaurant for lunch, and a little girl noticed the holstered handgun he was wearing.

"The kid screams out, 'Mommy, mommy, that man's got a gun!'" he said on a recent episode of the podcast Arms Room Radio, adding that some people gave him the "stink eye" afterward as result. "I thought, God, there's got to be a better way to do this."

Kjellberg's answer was to start a new company, Ideal Conceal, which plans to market later this year what might be the ultimate in surreptitious armament — a small pistol with a folding grip that's designed to look like a smartphone. That way, a person can carry it clipped to a belt or tucked in a pocket, and no one around him or her will be the wiser.

So far, only a plastic model and digital blueprints of the smartphone gun exist, but Kjellberg says he's in the process of having a prototype built and tested, with the aim of going into production in October. Already, based mostly on a few drawings on the company's website and Facebook page, about 5,000 people have expressed an interest in buying the weapon. Recently interviewed by phone, Kjellberg says that the potential customers range from real estate agents who don't want to alarm customers, to bodyguards who want to remain inconspicuous in a crowd. "You don't want people to see you packing a .45," he says.

Because it sacrifices heft for subterfuge, the smartphone gun isn't the most powerful weapon around. It fires relatively small .380-caliber projectiles and only contains two bullets. But in emergencies, says Kjellberg, "the best gun is the one you have with you."

To ensure it won't go off in a user's back pocket, the gun is designed so that it can be fired only when the safety is off and the grip is fully unfolded. Even so, depending upon a user's skill, it should be possible for someone to pull out the smartphone gun and quickly get off a shot or two with just one hand. "It's designed to happen fast," Kjellberg says.

But that ability to morph in an instant from an innocuous, commonplace personal accessory into a lethal weapon also has some people worried.

"You can envision a scenario in which police officers are called to the scene where some physical altercation is taking place, " says Ladd Everitt, director of communications for the Coalition to Stop Gun Violence, a Washington, D.C.-based organization. "An officer goes to intercede, and he's not aware that the person he's dealing with is armed, because it looks like an iPhone on his belt."

Everitt also points to the risk of children being attracted to the novelty of a smartphone gun. "If you're a parent, you understand how often your kid wants to play with your phone," he says. "This presents a very obvious danger."

Kjellberg, who counts police officers among his potential customers, doesn't see the smartphone gun as presenting any more of a risk to officers than other sorts of concealed weapons. The gun can't be fired from its phone-like configuration, he notes, and the need to unfold the handle would give officers a moment in which to react. As for the potential for accidental shootings by children, he said that his should be treated like any other gun.

"You've got to keep this stuff locked up," he says, "and be careful when children are around."

Kjellberg says that because the smartphone gun will contain metal and conventional gun parts, it'll be instantly recognizable to airport scanners and will set off metal detectors in government buildings and other public places as well. He said he's already contacted federal authorities and offered to provide x-rays and blueprints for the weapon to the Transportation Security Administration, which monitors airport checkpoints. (A TSA spokesman declined to confirm that or to otherwise comment.)

What regulatory hurdles the smartphone gun faces remains unclear. Brian Garner, a special agent with the federal Bureau of Alcohol, Tobacco, Firearms and Explosives, says via email that the bureau would need to examine a prototype of the smartphone gun to decide whether it would be regulated under the National Firearms Act, a 1934 law that requires federal registration for certain types of unusual weaponry, such as machine guns and silencers. Garner said that over the years, ATF has seen a variety of firearms disguised as items such as pens or walking canes, and that there have been previous guns disguised as phones as well.

Now That's Interesting
A 2015 study looked at U.S. gun permit data and crime statistics in 500 counties across four states and found no statistically significant correlation between changes in concealed carry licensing and crime rates, including the rates of violent personal crime such as the murder rate and robbery.