Is your children's computer time affecting their sleep patterns?

Browse the article Is your children's computer time affecting their sleep patterns? 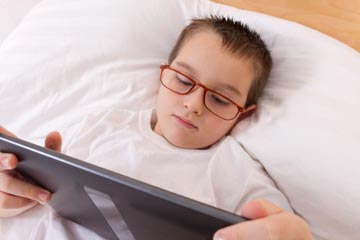 Could your child's sleep troubles be related to too much computer time?
iStockphoto/Thinkstock

As F. Scott Fitzgerald once said, "The worst thing in the world is to try to sleep and not to." As a parent, you can probably relate to a few sleepless nights from time to time. Oh, OK...maybe more than a few. But hey, you can handle it because you're a parent and you're invincible, right?

But when it's your kids' sleep that's suffering, it's a whole other ballgame. When kids don't get enough sleep, their attention, behavior, performance in school and even health can suffer. And let's not forget that sleep-deprived kids can be a drain on your own energy and nerves. So what's affecting your kids' sleep patterns? Can something they use on a daily basis -- the computer, for instance -- make it hard for them to sleep?

Kids today have more media options, and more ways to access that media, than ever before. According to findings published by the Joan Ganz Cooney Center which studies the role of digital technologies in childhood literacy, about 60 percent of children between ages 5 and 9 use the Internet every day! But that's not really all that surprising -- much of today's media caters to the tastes and interests of your kids. From 24-hour kids' TV programming to Web sites and computer and video games featuring their favorite characters, it's a non-stop, all-day party for their brains. There's just so much to hold their attention that it makes you wonder if they're really able to power down long enough to catch some shuteye.

So how, exactly, does all of this stimulation affect your kids' ability to sleep and what you can do to minimize the impact?

Computer Use and the Body's Sleep Functions

As a parent, there's certainly a lot to worry about when kids use the computer. We worry about what Web sites they're stumbling across, whether the computer games they're playing are age-appropriate and even about the health effects of long hours spent sitting in front of a glowing screen. But spending time using a computer, especially right before bedtime, can also throw their sleep-wake cycles out of whack.

Computer use can alter body chemistry in ways that make it tough to get to sleep. For instance, a report by the Kaiser Family Foundation explained that exciting media content, whether it's TV, computers or video games, increases the release of stress and arousal hormones in the body. These hormones can lead to delayed sleep and poor sleep quality. Engaging with interactive media, like computer games, also increases alertness hormones and makes it harder for kids to disengage when it's time to go to bed. If kids have a tough time settling their mind or relaxing after intense or prolonged computer use, they might have difficulty falling asleep, too.

And that's not all. A study published in the Journal of Applied Physiology found that exposure to bright light from the computer screen decreases the body's production of melatonin, which tricks your body into thinking it's time to wake up, not go to sleep. Melatonin is a hormone that helps regulate the body's sleep-wake cycle, and without it your sleep habits can get pretty unbalanced. At night, the body's temperature also drops. But exposure to bright light at night can cause the body's temperature to stay higher than normal, which can also mess up your sleep cycle.

Yet another way computer use can impact sleep is if it replaces physical activity. People who stay physically active tend to sleep easier, and if kids are spending more time on the computer and less time being active, it can definitely have an impact on their sleep.

Do television and cell phones have the same effect?

All of these physiological effects aren't limited to computer use. Watching television, playing video games and even texting on a cell phone can all have the same impact on sleep. And these days, when many kids have TVs in their bedrooms and sleep with their phones nearby, it's even harder to separate media use from bedtime.

Computer Use and Bedtimes

OK, so we know that the lights and excitement of using a computer can affect your kids' body chemistry and keep them awake longer than you'd like. But there is also a much simpler factor in play: Spending time on a computer can alter your kids' bedtimes, and irregular bedtimes can make it harder to sleep.

Kids today use media and electronics for longer periods of time than ever before. Unlike TV shows, which have a defined start and end point, computer use can go on indefinitely. And because computers can be used at any time of day, they're often used late into the evening and right before bed. As a parent, you've probably heard your kids plead for five more minutes of computer time before it's lights out, but going to sleep at a different time each night can really disturb your their sleep habits. A consistent bedtime every night will go a long way toward making sure your kids get the rest they need.

For the best chance at getting a good night's sleep, the National Sleep Foundation suggests avoiding exposure to bright lights at nighttime, and putting away the computer (or any electronic media) at least an hour before bedtime. Another tip, from the National Institutes of Health, is to take the computer out of the bedroom. If kids' brains are conditioned to expect stimulation when they're around the computer, keeping it in the place they're trying to sleep can be counterproductive.

Want to know more about kids and sleep? The links on the next page might just lull you in.

How much sleep do kids really need?