Bad Tech Behavior: What You're Teaching Your Kids

Browse the article Bad Tech Behavior: What You're Teaching Your Kids 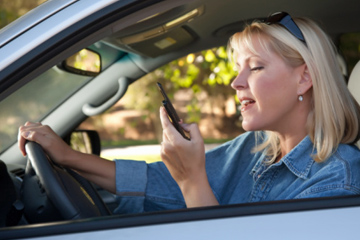 Texting while driving could be deadly. Don't teach your kids this awful habit!
Hemera/Thinkstock

You know your kids are like little sponges soaking up everything around them. This can be hopelessly adorable sometimes. Other times, it can be irritating or even a little scary. The problem with teaching kids about appropriate behavior is that they pay a lot more attention to what you do than to what you teach. Any teen watching your car wobble down the road while you adjust your seat or dash-mounted GPS might be inclined to think distracted driving is only natural, and that texting or chatting on his handheld cell phone while driving may be OK. This isn't to say that the only way to teach your children responsible driving is to keep a white knuckled grip on the steering wheel at all times, but know that your actions are being observed -- whether you're behaving like a sensible grownup or not.

Using technology safely isn't the only problem. The electronic age has created whole new categories of rudeness that mannerly folks just haven't adopted hard and fast rules about yet. Imagine standing in an elevator with a stranger. That person asks a question, and just as you open your mouth to answer politely, he turns and you discover he's talking on a cell phone. Ever happened to you? Beyond feeling embarrassed and maybe a little irritated, don't you get the sense there should be some social rule that protects you from having to listen in on private cell phone conversations conducted in public places? What about the guy who blasts the bass on his stereo so high the music undulates down the street like a controlled earthquake, or the nitwit who forgets to turn his phone off before entering the theater?

The rules governing polite tech behavior may lag behind the technology itself, but that's the time when good manners and circumspection should step in to rule the day, especially in front of the kids. For example, you may realize that grabbing the remote control and channel surfing while others are trying to watch the television is a no-no, but your teen may decide it's perfectly fine after watching your blithe disregard for everyone else in the room. When he gets older, you may find yourself wrestling with him for control of the remote on a regular basis -- and he may end up bigger than you.

On the next page, let's take a look at some more ways parents (and others) are teaching kids the wrong lessons when it comes to technology and good manners.

You probably interact with technology throughout the day. From turning on the flat screen (and DVR) to get the weather report in the morning to checking the gas prices on a smartphone or calling ahead to make a lunch reservation. Tech tools offer us unprecedented access to information -- and each other. As tools, they're only as good or bad as the people who wield them, but that can be a big catchall.

There's a lot of talk these days about cyberbullying (sending threatening e-mails or texts), sexting among minors (sending sexually explicit photos or texts) and loss of privacy on the Internet. Things have become so disturbing that many schools have instituted a list of rules for courteous conduct when using electronic media. Some of them are common sense, like not using foul language, but the fact that these lists are now being taught in school gives us a hint that responsible conduct when using technology isn't always intuitive. How would you fare if you were being completely honest about your tech use and occasional abuse:

How Many Kids Text While Driving?

According to a Pew Research Center report, more than 30 percent of teens with cell phones used them to send text messages while driving or stopped at a red light.