Could an RFID keep you from losing your socks? 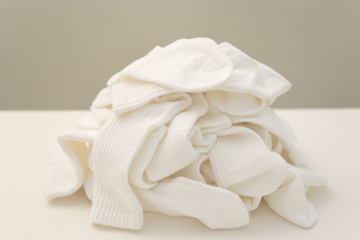 With only five more weeks until summer break, school days seemed to drag on interminably and school uniforms seemed more confining than ever. Callie, a high school senior, just couldn't take it anymore. On a Thursday afternoon, with history and calculus looming in the near distance, she cut class. It wasn't the first time she'd seen a movie in the middle of the afternoon. But it was the first time school officials knew for sure she wasn't on campus.

That's because Callie's school uniform was equipped with a radio frequency identification (RFID) chip embedded beneath the embroidered insignia. This technology is similar to that in use in two San Antonio, Texas, schools, where tracking students' moves on campus with RFID ensured an accurate head count that bolstered school funding — and it also allowed school officials to know when students were skipping class [source: Hadlock].

RFID uses radio waves to establish identification automatically. For example, an RFID chip may associate a particular serial number with a particular person or object. It will then transmit information about the movements of the person or object to which it is attached via electromagnetic waves. First used in the 1970s, RFID has become more prevalent as the production costs have dropped [source: RFID Journal].

RFID chips are used to keep track of everything from packages to people, and they've even been used to monitor the whereabouts of livestock. And now it can trace your socks, too. At least one clothing company is using RFID technology in an attempt to end the age-old missing sock dilemma — albeit for a price tag of more than $100 [source: Flacy]. By adding an RFID tag to socks, you can now track their exact location, whether the matching pair is safely tucked in a dresser drawer or — and more likely — an errant sock is hiding under a bed or matched with the wrong mate.

The RFID-chipped socks have a radio transmitting tag that sends signals via Bluetooth to an app on a smartphone. Using the app, users can match socks without fear of error. The application also lets them know critical information like whether the socks have been washed the same amount of times, in addition to the original manufacturing date of each. The app can even alert users when it's time to buy new socks [source: Flacy].

Although the socks cost more than average, there is an upside. Not only will you have expertly matched socks at your disposal, but with socks this smart, you'll have plenty of time to search for your misplaced car keys.

Is the Internet making children less polite?
How to Streamline Your Life
Consumer Electronics Show 2001