Save Energy by Avoiding Phantom Power 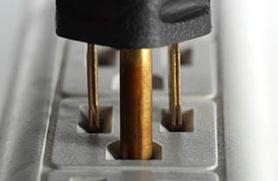 Though it's known by a laundry list of names-phantom load, idle current, vampire power and wall wart are the most common-this "phantom energy" all does the same thing: sucks extra energy from the grid into your home when you aren't looking and you don't need it. Many gadgets, electronic devices and appliances draw power even when they're switched off or not in use, just by being plugged in, and though it may seem trivial, it can add up over time.

Chargers for cell phones, digital cameras, power tools and other gadgets draw energy even when they're not in use. Appliances like televisions, computer monitors, and DVD players can also draw power whenever they're plugged into an outlet. All together, phantom energy can account for about 10 percent of an individual home's electricity use. It might not sound like much, until you consider that cutting out that 10 percent will get you over a month of free electricity every year.Taking quick action, like unplugging your devices when they aren't use, will cut back on phantom power, though it can definitely be a hassle to crawl behind the TV every time you're done watching. There are a handful of devices designed specifically to combat phantom energy (and that's another post), but plugging bundled devices-think TV, DVD player, and DVR, or computer, monitor, and printer- into the same power strip and then turning off the power strip will do the job.

When buying new electronics, check out this database from the Federal Energy Management Program at the U.S. Department of Energy, and stay tuned for more tips on combating phantom energy.