by Jonathan Strickland
Prev NEXT
19 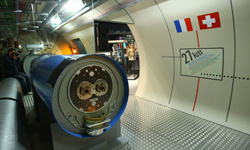 Did CERN shoot a beam of neutrinos that traveled faster than the speed of light?
Johannes Simon/Getty Images

Under a mountain in Italy, a few scientists discovered something troubling. They had received a special delivery of subatomic particles called neutrinos from CERN, the European Organization for Nuclear Research. The neutrinos didn't come via the post -- CERN projected a beam of neutrinos at the Gran Sasso facility where the scientists waited patiently for their arrival. They knew the wait wouldn't be long -- it would only take 2.4 milliseconds.

Except the neutrino guests of honor got to the party early. According to the scientists, the particles arrived 60 billionths of a second earlier than they were supposed to. They also claimed a margin of error of 10 billionths of a second. This would suggest that neutrinos can travel faster than the speed of light, something a certain Mr. Einstein would take exception to.

The scientists invited others to repeat their own experiment to see if perhaps there were some other explanation for the phenomenon. Good science requires experiments to be replicable and reliable -- it's completely possible that an error was the real culprit and that neutrinos weren't being naughty little speed demons. We're still searching for answers -- could neutrinos move faster than the speed of light? Could this mean that we can send information into the past? Does this violate the laws of cause and effect? Or is there some variable somewhere that we simply haven't noticed yet? We have top scientists all over the world looking into it. So far, one experiment has been able to confirm the results, though more testing is needed [source: Brown].