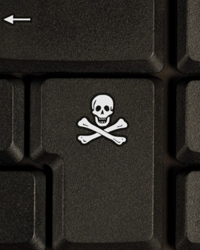 The concern over piracy grew in 2011.
iStockphoto/Thinkstock

Hackers were busy in 2011. There were several stories involving hackers causing mischief, damaging systems and even committing acts of espionage.

In March, the world found out about a massive hacker attack on e-mail marketer Epsilon. The company specializes in maintaining databases of customer information for other companies. The hackers stole files containing millions of people's e-mail addresses and other data. People immediately began to worry about everything from dealing with virtual mountains of spam messages to watching out for identity theft.

Sony had a tough spring and summer due to hackers. Someone breached Sony's security and accessed files for millions of Sony PlayStation and Sony Online Entertainment customers. Among the data stolen included the names and addresses of players, their usernames and passwords, birth dates, e-mail addresses and more. Sony said there was a possibility their users' credit-card information may have been stolen as well [source: Baker and Finkle]. The company shut down access to its online services for more than 20 days in order to address security concerns and investigate the matter. In the following weeks, the hackers -- or perhaps a new group of mischief-makers -- targeted the company's other assets.

It was also a big year for two groups known for their online presence: Anonymous and LulzSec. Anonymous is difficult to define, but broadly it's an activist group that leverages technology to raise awareness, make demands and occasionally cause trouble. It was mentioned in connection with the attack on Sony, though Anonymous said it wasn't responsible [source: Anderson] LulzSec is even harder to categorize. This group of hackers made it a quest to point out how computer security can be vulnerable to attacks by picking several high-profile targets. The group also expressed a sense of glee while wreaking virtual havoc. Both organizations caught the attention of law enforcement and several sting operations targeted both groups in the second half of 2011. Officials arrested a handful of people associated with both organizations, though not enough to shut them down.