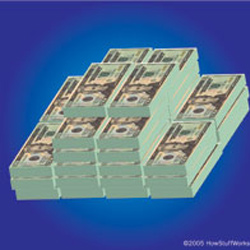 If you really think about it, currency is built on an agreement that little pieces of paper (or bits of metal) have a sort of intrinsic value. So why should a digital version of currency, one that was not the product of any nation or state, present any sort of problem?

That was the genesis of Bitcoin, an online, peer-to-peer currency first proposed in a 2008 research paper [source: Wallace]. There's some complicated math that keeps Bitcoin safe -- you can only spend a physical coin once and it leaves your possession, but you have to make special arrangements to keep digital money from duplicating all over the place. And there's a limited supply of Bitcoins that enter the global population only after computers solve some fiendishly difficult math problems -- a process called mining.

In 2011, Bitcoin value hit an all-time high of around $32 per coin. This was a surprise to some economists because the currency had very limited uses. Only a few merchants accepted Bitcoins as currency. And some of those merchants dealt in black market or otherwise illegal goods.

The value of Bitcoins plummeted dramatically in the second half of 2011. By October, the value of a single Bitcoin dropped below the price of producing the coins through mining. The world might not yet be ready for a stateless, digital means of exchange.