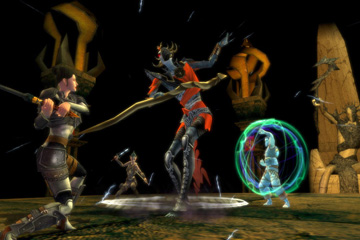 Characters can band together to fight tough enemies.
Courtesy Turbine

Originally, Dungeons & Dragons Online was a subscription service game. That meant players had to pay a monthly fee to create a character and play the game. In June 2009, Turbine changed the business model for the game. Now any player can download the game client and log in for free. Players with free accounts have access to basic character races, classes and content.

But a player with a free account won't have access to everything in the game. The game locks away certain races, classes, regions and adventures. To unlock these features, players have two options: Subscribe to the game for $14.99 per month or purchase each feature individually using Turbine points. Players can earn Turbine points through in-game achievements or by purchasing them in the DDO Store. It's possible to earn enough points in the game to purchase items in the store but it's a slow and sometimes arduous process.

In addition to unlocking content, players can use Turbine points to purchase equipment for their characters. Rather than adventuring high and low to find that perfect sword, you can whip out your credit card, purchase some Turbine points and go on a shopping spree. That's called a microtransaction -- the player spends a small amount of money once to purchase a particular item or feature.

Turbine refers to players who subscribe to the game as VIP players. A VIP player not only has access to all the classes, races and regions in the game, but also receives an allowance of 500 Turbine points per month. Since VIP players don't need to use points to unlock features, they can dedicate their points to items and equipment. Turbine uses this as an incentive to encourage players to subscribe to the game.

Turbine points are nontransferable and any item you purchase becomes locked to that character. This helps prevent people from selling equipment to other characters for real cash.

Next, we'll look at what's under the hood at Dungeons & Dragons Online.

Is it possible to access everything in the game without paying for it? It is, but it would take hundreds of hours of playing to manage it. Players would have to run through the same adventures multiple times to unlock everything. While it may be theoretically possible to unlock all the content for free, Turbine is counting on players finding the prospect too tedious.