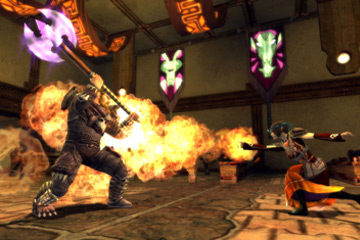 There are only a few areas in Dungeons & Dragons Online where you can combat other players.
Courtesy Turbine

In the traditional paper version of Dungeons & Dragons, combat encounters take place over a series of rounds. During each round, characters are allowed to take a certain number of actions (the number and nature of which depend upon the character's skills and statistics). Some actions may require multiple rounds. At the beginning of each round, players roll for initiative to determine the order of events. The game master asks each player what he or she wants to do. Then the game master determines the difficulty of that task, the players roll some dice, and the game master describes what happens next.

While this rule structure works well for a tabletop game, it's not as satisfying when translated into a computer game. For that reason, Turbine decided to make combat more interactive. Rather than using a turn-based system, combat happens in real time. Players use a computer mouse to target and attack opponents. The game system still determines whether or not the player's strike will hit the target.

When you attack an opponent, the game randomly generates a number for each strike. If the number is high enough, your strike makes its way home and the target takes damage. If the number is too low, you miss. Even if you have dead-eye aim on your opponent with your mouse, a swing may not make contact.

Players who prefer twitch-based games (games that rely on the player's physical skills) may find this system frustrating. But for players who aren't as adept at aiming with a mouse, the system works well. As long as the character is facing in the general direction of the opponent, the player has a chance to defeat his or her enemy.

Characters in Dungeons & Dragons Online tend to have more hit points than traditional D&D characters. They also recover the ability to cast spells much more quickly than the basic rules of D&D allow. Turbine made these changes to the rules of D&D to make the game more enjoyable for players.