Inside the Phone Base 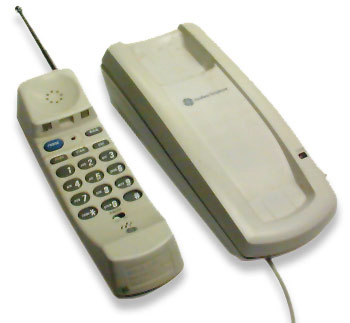 GE cordless phone, including handset and base unit

To illustrate the parts of a cordless telephone, we will show you the inside of this one from General Electric (GE). It was made in 1993 and operated in the 43-50 MHz range.

As mentioned above, all cordless phones have a base and a handset. Let's look at these parts individually.

Base - The base unit of the cordless phone is plugged into the telephone jack on your wall. If you open up the base and expose the circuit board, you see several components that carry out the functions of the base:

Circuit board in the base of the GE cordless phone
HowStuffWorks.com

Phone line interface components do two things. First, they send the ringer signal to the bell (if it's on the base) or to the radio components for broadcast to the handset. This lets you know that you have an incoming call. Second, they receive and send small changes in the phone line's electrical current to and from the radio components of the base. When you talk, you cause small changes in the electrical current of the phone line, and these changes get sent to your caller. The same happens when the caller talks to you.

In addition to the above components, some bases also have audio amplifiers to drive speakers for speaker phone features, keypads for dialing, liquid crystal displays (LCDs) for caller ID, light-emitting diodes (LEDs) for power/charging indicators, and solid state memory for answering machine or call-back features.

Take a look inside the handset next.