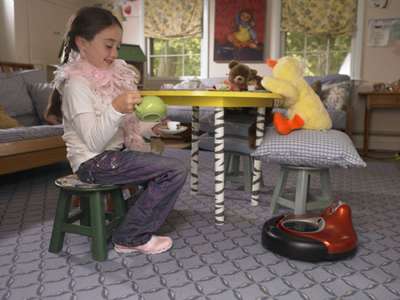 iRobot, a company founded by Massachusetts Institute of Technology roboticists, recently revealed the revolutionary ConnectR. Its newest robot looks a little bit like a curling stone, with a reddish-orange color reminiscent of the set of "2001: A Space Odyssey." The company has had success with its other robots, including the Roomba, a robot vacuum cleaner; the Scooba, a robot mop; and the Verro, which cleans pools. A gutter-cleaning robot, the Looj, was revealed by the company the same day as the ConnectR.

But the ConnectR is different from its siblings. Rather than to serve a strictly utilitarian function like cleaning floors, it was created for social purposes. As a virtual presence, the household bot is meant to keep far-off relatives and late-working parents connected to their families.

The robot is based on the Roomba design and features two high-resolution video cameras along with a two-way audio system. It can be controlled remotely, so fretful homeowners can look in on their house when they're away, and adept users could even conceivably play fetch with their dog remotely. Parents can play hide-and-seek with their child, grandparents can read a book to their grandchildren, and vacationing families can check up on the cat while they're away.

Since the ConnectR is mobile, the "host" family doesn't have to stop what it's doing to have a conversation with a distant relative. The robot ostensibly serves as a stand-in, and conversations can take place in much the same manner that they would if everyone were in the same room.

So how does it work? The ConnectR is based on the Roomba design, so it's highly mobile and won't tip over easily. But the company doesn't say anything about stairs, and traditionally, Roombas have a difficult time with stairs and tend to avoid them entirely through their design.

The ConnectR's audio-visual equipment is what separates the robot from its siblings and makes the ConnectR a virtual presence.

It sounds like the ConnectR could enable families to stay closer, but there may be some kinks left in the robot's design. Read the next page to see some of the potential problems associated with the ConnectR. 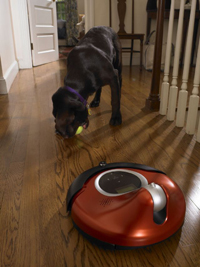 Sagrada Familia Basilica Is Almost Finished, After Just 137 Years
What's the Difference Between an Avenue, a Road and a Boulevard?
Seiichi Miyake Created Tactile Paving System to Help Visually Impaired