Can you charge your cell phone with a fuel cell?

Browse the article Can you charge your cell phone with a fuel cell? 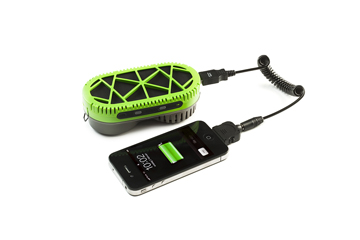 Can the PowerTrekk from myFC AB really power a fuel cell with just a little tap water?
Courtesy myFC AB

Just a few years ago, a typical cell phone would let you make calls, send and receive text messages, and perhaps allow you to surf a text-based Web page. Today, smartphones come packed with features. You may be able to play games, listen to music, navigate to an address, surf the Web and activate one of a million different apps. But all this functionality can tax your phone's power supply. While a cell phone from a decade ago might have lasted several days on a single charge, a smartphone may not be able to make it through more than a day without the need for more juice.

This might not be a big problem if you always have a charger at hand and a way to plug your phone into a power supply. But if you're on the go and you can't plug your phone into an electrical socket or a computer's USB port, you may be in need of other options. You could carry extra batteries with you so that you can swap them out on the fly, but that just increases the number of batteries you need to charge each day.

You have other options. There are products on the market that convert kinetic energy into electricity. But what if you don't want to crank for half an hour in order to send a text? There are also solutions that harness solar power to help you recharge your electronics. But then you have to hope for a sunny day to take advantage of them.

The secret to the way fuel cells work lies in chemistry. Certain atoms tend to bond with other atoms to form molecules. Hydrogen and oxygen are a good example -- a pair of hydrogen atoms can bond with an oxygen atom to form H2O, a water molecule. By putting a couple of steps between hydrogen and oxygen bonding together, we can harness electrons.

The typical method involves two chambers. In one chamber, you have pressurized hydrogen gas (H2). In the other, you have oxygen (O2). Between these two chambers, you have a catalyst and a membrane. The catalyst causes hydrogen gas to split into electrons and positive hydrogen ions. The membrane is like a bouncer at a club: Cute positively charged ions can get through, but nerdy negative particles such as electrons can't.

Because of that bouncer, the positively charged hydrogen ions pass through the membrane to get at the oxygen atoms on the other side. Then, the hydrogen and oxygen bond together. But these molecules miss those electrons that got left behind. And here's how a fuel cell can provide electricity.

Some of these fuel cells can only operate at temperatures much higher than would be practical for a fuel cell that can fit into your pocket. Others rely on catalysts made from rare materials like platinum, which increases the cost of a fuel cell. A few can't operate below a certain temperature threshold because the membrane will freeze. Finding the right fuel cell for mobile electronics is important.

So what kind of fuel cell might we be able to use to recharge our phones? 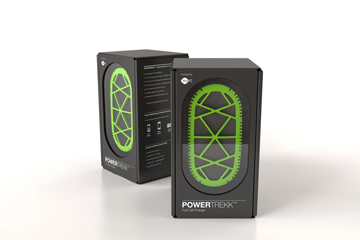 The PowerTrekk uses canisters of metal dust to generate hydrogen. Water reacts with the dust, splitting into hydrogen and oxygen and creating fuel.
Courtesy myFC AB

There are several companies working on bringing pocket-sized fuel cells to the market. Not all of them use the same approach. Lilliputian Systems has a fuel cell that uses butane as fuel. Butane is a hydrocarbon, which means that it's made up of hydrogen and carbon atoms. The chemical notation for butane is C4H10 -- there are four carbon atoms and 10 hydrogen atoms in a molecule of butane.

Inside the fuel cell, pressurized butane molecules split apart into ions and electrons once they come into contact with the catalyst. The ions move across the membrane into an oxygen chamber. There, the ions combine with the oxygen atoms to form water and carbon dioxide. The electrons that split from the ions travel through the electronic pathway to rejoin the ions on the far side of the fuel cell.

Carbon dioxide is a greenhouse gas. Since it's a byproduct of a hydrocarbon-based fuel cell, many consider these fuel cells to be less environmentally friendly than a purely hydrogen-based fuel cell. But how could we get around the problem of generating pure hydrogen?

One potential solution may be to get hydrogen from water. We can harness hydrogen by zapping water with electricity to break the molecular bonds and split water into hydrogen and oxygen. This is a process called electrolysis. While this will give us access to hydrogen, it doesn't make sense from a power-generation perspective -- we have to use power just to get the hydrogen and so we operate at a net loss from a power perspective. But you can also get hydrogen from water through a chemical reaction.

Using a powder of alkali metals, it's possible to create a chemical reaction with water that will give off hydrogen gas as a result. Typically, introducing an alkali metal to water causes an explosive reaction in which hydrogen and a metal hydroxide are the byproducts.

A chemist named Michael Lefenfeld created a mixture of alkali powder and other additives that react with ordinary tap water to produce hydrogen without the accompanying explosion. By feeding that hydrogen into a fuel cell, you can have a purely hydrogen-based method to generate electricity.

Using this alkali powder and a fuel cell means that you could power electronic devices just by pouring a little tap water into the charger. The water will react with the alkali powder to produce hydrogen. The hydrogen moves into the fuel cell chamber and combines with oxygen to form water and generate electricity. You'll have to replace the powder cartridges in your device in order to generate more hydrogen as the alkali converts to metal hydroxide.

Fuel cells rely on some pretty volatile chemicals. Hydrogen is flammable stuff. Butane is also a flammable material. And alkali metals can be dangerous as well. But with the right fuel-cell design, these materials can remain relatively safe. You wouldn't want to toss a fuel cell into a roaring fire, but you shouldn't have to worry about your pants igniting spontaneously due to an out-of-control chemical reaction.

Fuel cell technology has the potential to revolutionize more than just mobile electronics. We could see fuel cells employed in everything from emergency power supplies to vehicles. It may not be long before we no longer think about recharging our mobile devices -- we'll think about refueling them instead.

I'm fascinated by fuel cells. I love the thought of harnessing a chemical reaction to generate electricity. It almost seems like tricking physics to do work for us -- we split up a happy atom into an ion and an electron. These two particles really want to get back together because of their opposite charges. Then we swoop the ion through a barrier through which the electron can't pass. That little electron wants to get over to that ion more than anything. Then we give the electron a road to get to that ion but it has to do work along the way. The electron does what we want it to do, and we get power as a result. Not only have we mastered physics, we've also anthropomorphized subatomic particles in the process! I love it.