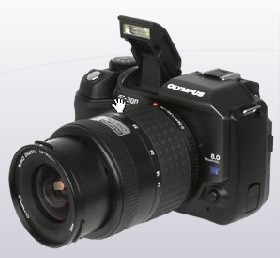 The E300 camera that they showed at the Olympus booth was still impressive.

This is a digital SLR with interchangeable lenses intended mainly for professionals and high-end amateurs.

The large, 8-megapixel sensor that Olympus uses has at least two big advantages according to Olympus: