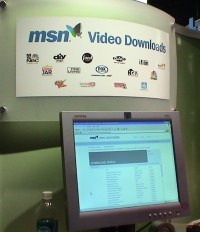 The Microsoft booth is a world unto itself, with dozens of mini-booths inside where people evangelize different Microsoft products.

One thing getting a lot of attention is the whole "Media Center" concept. There are at least four parts to the Media Center idea:

While the Media Center concept can handle music and photos, the big focus seems to be on video content.

It seems limited right now, but it is a start.

Two other free things in the Microsoft booth: