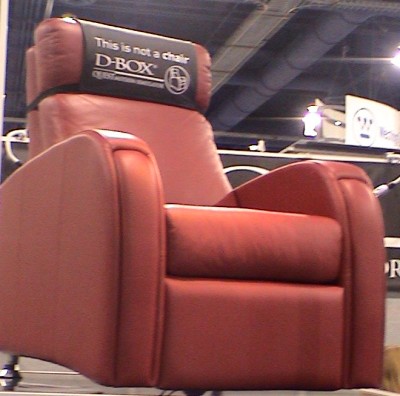 If I had to pick one thing that really surprised me at CES 2005, it was this chair:

It looks like a normal recliner. The back two legs, however, are able to move up and down about 4 inches (10 cm).

They claim that these two moving legs make the chair a "motion simulator."

I looked at it and thought, "I doubt it." But they had tickets for a demo, so I got a ticket and came back an hour later. They had a small home theater arrangement with maybe a dozen of the chairs set up for viewing a movie.

They explained at the beginning of the demo that by getting your feet off the ground, the motion effect is enhanced. Apparently, if your feet are touching the ground, your brain understands that and cancels out a lot of the motion information. That's why the chair is designed as a recliner. So we put our feet up.

Then they explained how it works. When a new movie comes out on DVD, people at D-Box watch it and create a set of "motion codes" to drive the chair. These codes synchronize the motion of the chair exactly with the action in the movie. You download the motion codes from the Internet or get them on a CD in the mail. When you play the DVD, you also play the motion codes so the chair reacts to the movie.

First, the demo showed what the scene would be like if you were sitting in a normal chair. Then, one by one, they added in motion effects:

Finally, they played the scene with all the motion effects. It really was a remarkable addition! You felt far more immersed in the movie, and it was much more exciting.

Then they showed a scene from "Spider-Man 2," which was just as convincing.

They did not mention a price, but I assume the chairs are not cheap for the home. But it is very easy to imagine all the seats in a movie theater having this technology to enhance the theater experience. It will be interesting to see if the technology spreads.