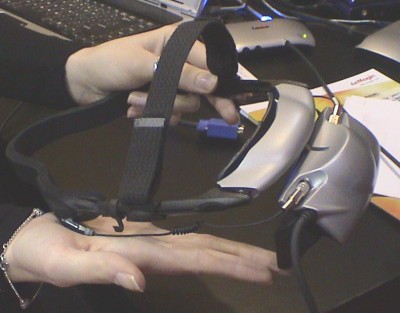 We've been hearing about "virtual reality" (VR) and "virtual reality headsets" for the last decade or more. Now, VR may finally be headed to the home. Emagin's headset is still in the development stage, but it should be available in 2005:

When you put the headset on, you see a very clear 800x600 image in each eye. The image is made possible by two tiny OLED displays about the size of a postage stamp (one for each eye):

These chips are incredibly light compared to previous display technologies, making the headset much more comfortable to use.

In the demo, they were using a game called "Unreal Tournament 2004" to drive the headset's displays. This game is able to generate stereoscopic views (giving your brain the impression of depth) and can also handle 360-degree viewing. A gyroscope in the headset tells the game where your head is. So, if you want to look to the left, you turn your head to the left, and the image shifts exactly like you would expect it to. It is an incredibly natural way to view the game environment. They are expecting a price point of about $900 when the headset comes out later this year.