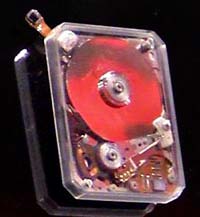 More in the realm of the here and now... Several companies were showing off tiny high-capacity hard disks, and the 0.85" drive from Toshiba pictured at the right was typical.

It's hard to get a sense of scale from the photo, so pull a nickel out of your pocket. That's about how big the platter is. The drive comes in a 2-gigabyte (single-sided) version and a 4-gigabyte (double-sided) version. It spins at 3,600 rpm, weighs 10 grams and can handle 1,000 G's of shock. These tiny drives will be fighting it out with Flash memory on the price/capacity/speed/size curve over the next several years in devices like digital cameras and MP3 players.

Another thing at the Toshiba booth was a caricature artist drawing caricatures using a Toshiba tablet PC:

The thing that was interesting about it was the fact that the artist seemed to be working in a completely natural way. But instead of using colored pastels, he was using the pen on the screen. Looking at the image he was creating, it looked just like a pastel image.