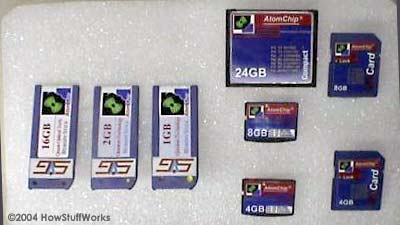 It's hard to know if this is real or not, but I will report what I saw. A company called Compu-Technics was showing something called Quantum-Optical RAM -- a very dense, non-volatile, high-speed memory device:

In another display (and on the AtomChip Web site), there is a 256-GB device not much bigger than the connector on a USB cable. The brochure the company was handing out says things like this:

So, either this is like cold fusion and it's a hoax, or we are about to see a fundamental paradigm shift that completely redefines the nature of computer storage. A typical hard-disk bay could hold many terabytes of this Quantum-Optical memory.