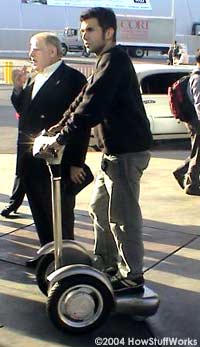 CES is so big that it fills multiple buildings in the Las Vegas convention center, several local hotel convention centers, and a number of outdoor tents and pavilions. Therefore, you spend a fair amount of time outdoors walking between all the venues. The first time this thing zipped by I thought "Segway," and I wished I had one. But then a second look revealed it to be something else:

Following it led me to the Rad2Go booth, where they were displaying a variety of scooters and other electric vehicles.

The Q has four wheels instead of the two of the Segway, and therefore none of the automatic balancing is required (two of the wheels are visible in the photo -- the other two are small, 4-inch, non-powered casters at the back of the platform that the rider stands on). Otherwise, it has the same basic form factor and footprint of a Segway, the same speed and range, and costs about one-third as much.

Other vehicles shown by Rad2Go included everything from basic scooters up to this Harley-esque motorcycle: