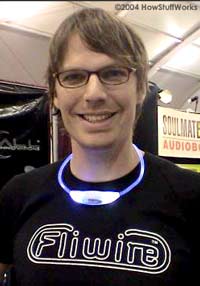 At the FliWire booth, they were demonstrating two things. The first was this illuminated necklace:

By using a larger piece of strap, it could also be worn as a belt.

Inside the small box is a microphone, a sound processor and a pair of LEDs. FliWire envisions you wearing this in a dance club, so the sound processor listens to the music, can pick out bass and treble beats and then illuminates the necklace in time with the music. If you are not in a dance club, then it illuminates when you talk and follows the sounds of your voice.

That's an innovative piece of jewelry for the club scene, but it was the other part of the booth that was even more interesting. The technology that makes this necklace possible is called "side-emissive fiber optics." In the case of the necklace, the fiber is a thick plastic rope about a quarter-inch in diameter. When an LED shoots light down the fiber, particles embedded in the plastic cause the light to be emitted out the side of the fiber, so the entire fiber lights up. It looks exactly like a neon light.

What the FliWire technology will become, eventually, is a replacement for glass neon tubes. The plastic fiber is cheap, extremely flexible and nearly impossible to damage. It takes very little power to illuminate it with an LED, and it is as bright as neon. FliWire had samples of the fiber up to 1 inch thick. If side-emissive fiber optics are as good as they claim, expect to see the demise of traditional glass neon lighting over the next year or two.