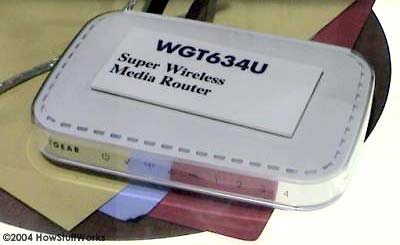 If you have a router from Netgear, you know that it is common for the company to integrate several different parts in the same box. For example, there might be a router, a wireless access point and a firewall combined in one unit. That trend is now extending. Netgear showed off a small box for adding storage to your network.

The idea behind a "media router" is that you can take an external hard drive with a USB 2.0 connection, plug it into the router, and the drive will suddenly appear on your network as a new place to store data. You access it through the standard "Network Neighborhood" feature of Windows XP.

This little box does the same thing with a USB printer:

You plug a network cable into one side of the box and the printer's USB cable into the other side, and the printer is instantly available network-wide through the standard "Network Neighborhood" feature of Windows XP.

With functionality like this, it is very easy to add disk space and printers to your network. The representative I spoke to mentioned that all of this functionality soon may be integrated into a single box, as well.