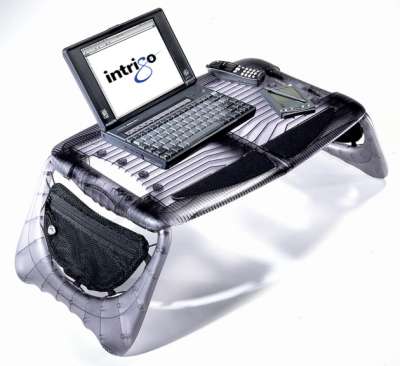 Our modern society is fast-paced. It seems like most of us spend our lives on the go, constantly shuffling from the office or school to home and back. For many of us, our computer is right there with us, along for the ride so that we can take advantage of any opportunity to work or play. In fact, many experts believe that mobile computing will eventually overtake desktop computing as the standard.

If you have ever had to balance a laptop computer on your knees while trying to use it, then you will definitely like the Lapstation. This graceful combination of stylish design and ergonomic utility is the flagship product of Intrigo, a hot new company based in Thousand Oaks, CA.

Lapstation started as an idea in the head of Maxim Weitzman, a student at Anderson Graduate School of Management working towards an Entrepreneurial MBA, because of the frustration felt by himself and fellow students as they tried to work on their laptops. In early 1998, Mr. Weitzman designed a folding lap desk and developed a prototype to see if it would work. He took the prototype to RKS Design, a local design company, and met with Ravi Sawhney, the company's President. Sawhney like the concept so much that he co-founded Intrigo with Mr. Weitzman in April, 1998 to develop and market the product. Another company, Peerless Injection Molding, Inc., became a strategic partner when Weitzman and Sawhney showed the Lapstation prototype to Scott Taylor, President of Peerless.

What makes the Lapstation cool is the simple beauty of the design. It took Intrigo and RKS Design a year to refine the original prototype into the design finally put into production. The Lapstation is split in the middle to fold up and the legs fold under, making it easy to carry around. All Lapstations have mesh pouches suspended between the legs. These pouches zip closed, making them perfect for storing diskettes, CDs and other small items. Each Lapstation has a wrist pad to reduce fatigue when working for extended periods. Lapstations adjust from 27.5" to 32.5" in width and from 10" to 11.5" in height. The total work surface is 25.3 x 16 inches and the pouches are 10 x 5 inches. When the Lapstation is folded up, it is 16"x12.6"x3.8". Expansion ports are built in that will work with accessories currently in development at Intrigo.

View this short movie to see how the Lapstation folds for storage!

There are three models to choose from:

This woman is enjoying her Lapstation.
Photo courtesy of Intrigo

Prices on the Lapstations range from $69 for the B1 to $139 for the B3. Intrigo has a Lapstation bag coming out in February 2001 to make it even easier to take your Lapstation with you. You can purchase the Lapstation directly from Intrigo at their Web site: www.intrigo.com.