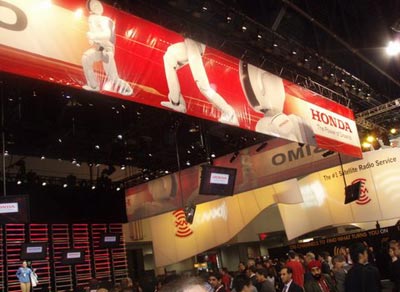 Most people think of the Consumer Electronics Show (CES) as a showcase of everything new, but the annual multi-conference-center sprawl of technology has been around since 1967. Since then, numerous groundbreaking products have made their debut at CES. Some of these, like the VCR and the compact disc player, were revolutionary. Others, like the Blu-ray and HD radio, significantly enhanced existing technology.

Every year, geeks and technophiles scour CES, looking for everything from dramatic breakthroughs to practical, handy gadgets. Here are the highlights of what members of the HowStuffWorks staff saw as they made their way around the show floor. We'll start with some of the most dramatic displays -- which, unfortunately, you can't take home with you.

As long-time fans of Honda's humanoid robot, we were particularly excited to see ASIMO at CES. ASIMO's latest iteration can run at close to 4 miles per hour (6.4 kilometers per hour). The newest model can also use a cart to move and carry objects. A new communications card lets the robot recognize people, and cameras and kinesthetic sensors let ASIMO move in tandem with humans.

You can pick up one of Sharp's high-definition AQUOS LCD televisions at a number of electronics and home entertainment stores. But you can't go out and buy the most impressive one -- at least not yet. Sharp's 108-inch model is, for the moment, a prototype. And while its enormous size is almost startling, its picture is surprisingly clear. It is, as one staffer put it, "The most amazing thing I've ever seen."

Next, we'll take a look at some geeky toys that are a little more likely to make it home. 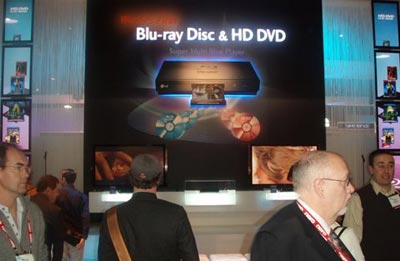 A 108-inch, high-definition TV is definitely cool, but it's not likely to fit into the average person's home. Here are some new high-tech toys that are a little more down to earth.

Many people are still on the fence about whether to choose a Blu-ray or HD-DVD player. Others think the format war is overrated and are sticking with their trusty DVD players until upgrading becomes a necessity. LG Electronics has introduced what might be an ideal option -- a player that can use both high-definition formats.

The multi-functional player will hit the market in the U.S. during the first quarter of 2007. It should sell for around $1,199.

Sitting in a massage chair used to be like sitting in a giant, padded cell phone set to vibrate. But newer chairs feature built-in, moving balls that feel uncannily like kneading hands. Sanyo's new Zero-Gravity Massage Chair takes all that one step further -- it reclines during your massage.

The Sanyo massage chair also has an impressive set of controls. You can choose from different massage styles, like shiatsu and tapping, and you can focus the massage on your neck and shoulders, lower back or lower body. The chair also features an automated massage circuit that includes the whole body. The chair should be available in the spring of 2007.

Even without a lot of bells and whistles, atomic clocks are neat. They display the standard time that the U.S. Naval Observatory's Master Clock keeps, and NASA uses this standard time when counting down for space shuttle launches. Plus, the idea that your clock or watch is periodically synching up with a clock that might be hundreds or thousands of miles away is inherently cool.

Casio's newest addition to their Pathfinder wristwatch line is a solar-powered atomic wristwatch. It uses a tiny antenna to communicate with the Naval Observatory clock a few times a day, and it uses solar power to recharge the batteries. On top of that, the Pathfinder PAW1300T-7V includes a barometer, an altimeter and a digital compass.

Some of the products that made their debut at CES are geared more toward practicality than coolness or style. We'll look at a few of those next. 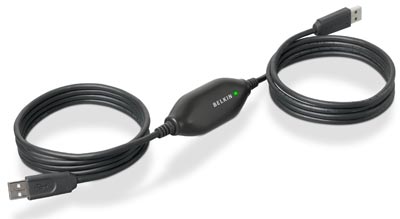 While enormous TVs, running robots and massaging chairs are eye-catching, some of the products on display at CES are interesting because of their inherent usefulness. Here are a few.

According to reports, people may be slow to embrace the new Windows operating system when it makes its consumer debut at the end of January. But for those who decide to go all the way and upgrade their PC as well as their OS, Belkin has developed an easy way to get data from one place to the other. The Belkin Easy Transfer Cable can connect a computer running Windows XP to one running Vista. It can then automatically move files at transfer speeds of 480 Mbps. A 30-GB transfer takes about an hour, and the cable can also move data between two PCs running Vista.

Another device for people with more than one computer is Belkin's Flip DVI-D switch, can connect one DVI monitor to two computers. A remote control lets you switch the display from one computer to the other, and it works with Mac or Windows operating systems.

Downloading movies and music to a computer has become remarkably easy. For some people, streaming video and downloads from the iTunes Music Store have nearly replaced over-the-air and cable broadcasts. But sometimes, getting those files to play on a television can be a chore that requires moving computers, sorting through cables and putting everything back the way it was when you're done watching.

The D-Link Media Lounge can simplify all that by making the process wireless. It uses 802.11n wireless networking to transfer data from a computer to a TV set. Its unobtrusive set-top box shouldn't get in the way and can be operated using a remote control. The Media Lounge should be available in stores in the second quarter of 2007.

In the past few years, digital camera manufacturers have made it easy to get pictures from cameras to computers. Docking printers have also made printing photos straight from a camera a snap. But this trend in getting digital files into an easy-to-use storage format has been a little slower to reach some digital camcorders.

HowStuffWorks will cover lots of this new technology in more detail as new products hit the market. Stay tuned to learn more.