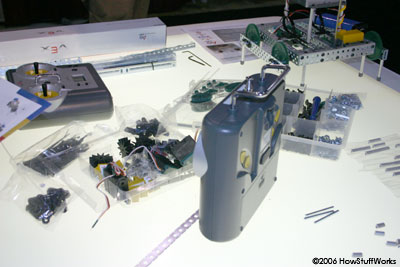 In April 2005, RadioShack launched the Vex Robotics Design System, a robotics kit line designed for middle level robot-builders. The kits are more complex than LEGO's Mindstorm kits but not as demanding or expensive as the most advanced robotic systems.

The inspiration for the Vex line was the FIRST robotics competition, the premiere robotics competition for high school students. RadioShack developed the kit with the input of professors at the Carnegie Mellon Robotics Institute, who helped create the Vex User's guide and are working on K-12 educational materials based on the kits.

As part of its Vex program, RadioShack has partnered with FIRST to start a new intermediate competition at FIRST, the "FIRST Vex Challenge."

In late 2005, RadioShack launched a new set of accessory kits, including:

Check out Marshall Brain's video tour of the Elecksen booth

For more on the Vex line, check out VexRobotics.com.