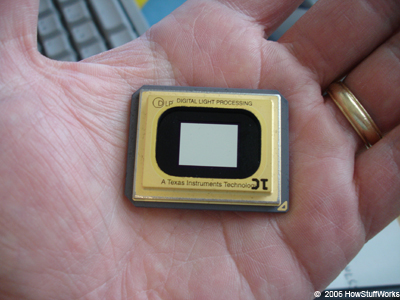 Most HDTV sets on sale today do not produce the full 1920 x 1080 resolution than the HD specification indicates. A typical plasma screen, for example, might have only 1365 x 768 pixels. The HD signal's resolution is down-converted to fit into the smaller number of actual pixels.

With these new DLP chips you get full HD resolution.

Most of the sets and projectors on display are still using a single DLP chip and a color wheel. However, a handful of the higher-end products were using three of the DLP chips. This lets them eliminate the color wheel for a more solid image.

The new DLP chips from TI also incorporate what's known as "Darkchip" technology, meaning blacker blacks on the screen. Contrast ratios are increasing, with some sets going as high as a 6000:1 on some projectors.