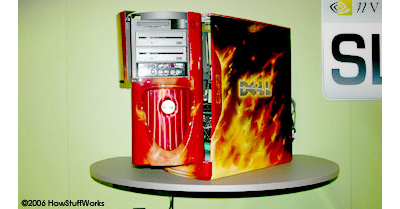 NVidia and Dell were showing a PC containing four Nvidia 7800 GPUs. It was dubbed the Quad SLI PC.

To pull this off, each GPU comes on its own card. Two cards are sandwiched together into a single module so they share a single PCI Express slot (an internal splitter in the module shuttles the PCI traffic to the two cards). Then the PC contained two of these modules for a total of four GPUs in a single machine.

These four GPUs were acting together, combining their horsepower so that the computer and game software thought it had a single graphics card of immense power. NVidia pegged the total horsepower at greater than 5 TeraFLOPS, with a total of 2GB of RAM and 40 billion pixels per second.

Nvidia then demonstrated the computer’s abilities by running the game Fear full-screen on a Dell widescreen display. The display had 2,560 x 1,600 pixels. That's 4 million pixels -- about twice as many as an HDTV. Then they cranked up the anti-aliasing and filtering to the max and played the game at frame rates that looked completely fluid. It was an amazing demonstration of computing power.

For more information on the Quad SLI system, visit NVidia.com.